I watched a very interesting program on Horizon this week about fasting to prevent aging. Although various types of fasting were discussed the terms detox fasting or juice fasting were never mentioned.

But, that is what happens with any type of fasting. Fasting gives your body a rest. It allows your cells to detox and cleanse their waste products so they can function at peak efficiency.

During the documentary Michael Mosley, science presenter, writer and executive producer, talked to scientists about the power of various types of intermittent fasting to help in the fight against aging, heart disease, degenerative brain conditions like Alzheimer’s and Parkinson’s, Type 2 diabetes and cancer.

Water fasting, of course, has been used as a healing process for thousands of years. Hindu monks, Budist monks and Taoist hermits fasted to boost their vitality and extend their lives.

Fasting is nature’s way of curing disease, restoring health and prolonging life. Animals instinctively refuse to eat when they are sick. Fasting is a powerful way to cleanse and detox your body of chemicals and other toxins that cause degenerative diseases.

Now, scientists are discovering the biological effects of various types of fasting. Unhealthy markers such as high cholesterol, bad LDL cholesterol, triglycerides (blood fats) and high IGF-1 can all reduce with fasting diets. Low levels of IGF-1 (Insulin Growth Factor-1) are associated with longevity.
Protein affects the amount of IGF-1 produced in the body.

In the true sense of the word fasting means abstaining from all food and drink except water. It was very popular in European spas at one time but some experts believe that we are too toxic to attempt water fasting these days. Researchers have discovered that glutathione, the amino acid that is used by the liver in one of the detox pathways, as well well as other detox mechanisms are depleted after 24 hours of fasting. 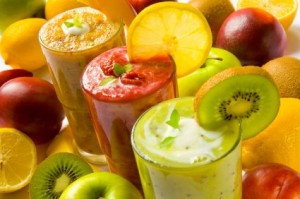 Although juice fasting was not discussed it is a form of fasting that rests the digestive system and gives your body a chance to catch up with it’s ever increasing task of detoxification. Juicing floods your body with abundant nutrients needed for liver detox and and creates an alkaline environment that allows your cells to start releasing the wastes and chemical toxins that have accumulated allowing your body to repair and heal.

Scientific research since the 1935 has established that calorie restriction in animals can extend their lives. Researchers at Cornell University first noticed that severely food-restricted lab rats lived twice as long as normal ones and were healthier

Many people follow a diet very low in calories but high in nutrients to stay healthy and with hopes of extending their lives. These people call themselves CRONies as they follow the CRON Diet (Calorie Restriction with Optimum Nutrition).

Cronies restrict their diet to 1900 calories a day. Not surprisingly, they do not eat simple sugars and flours but eat a lot of green leafy and other vegetables, legumes and whole grains. Sounds like a detox diet to me!

Joe, the Cronie who was interviewed in the program, had a bowl of strawberries with the just the skin of an apple for breakfast. He threw away the rest of the apple as he said most of the nutrients were in the skin and it was too full of sugar, albeit natural fruit sugar, and to save on calories.
That seems so wasteful to me and goes against the principle of eating whole food.

Tests showed that he was a lot more healthy than Mosley so there must be something in it.

The alternate day fasting (ADF) diet involves eating 50 per cent of your normal intake on one day and and as much as you like the next. Sounds like a dieters dream doesn’t it?

In 2003 Dr Mark Mattson, an American neuro-scientist, discovered rats still enjoyed all the health benefits of calorie restriction even when their calories were cut only on alternate days.

In the Horizon program Mosely interviewed Kristie Farady, assistant professor of kinesiology and nutrition at the University of Illinois, Chicago. She explained that the alternate day fasting involves eating one meal only of 500 calories one day and as much as you like on the “feed day”. Strangely enough people ended up losing weight because they did not gorge themselves on the feed day.

As you can imagine this type of eating appeals to more people than the calorie restriction diet. I found it hard to believe that even when people ate unhealthy, fatty,  fast food on the feed days they still lost weight and their risk markers for heart diseases were just as low as the CRONies. Dr Varady is the first person to admit that research into ADF is still in its infancy.

I think it makes far more sense to eat a heaathy diet on the feed days. I wrote a blog post about how to do this diet using green smoothies on the fast day.

Not to be confused with the Five and Two Eating Plan where you eat healthily for 5 days and eat sinfully for 2 days a week,  the 5:2 diet consists of 5 days of “normal” eating with 2 days eating only 500 ( females) – 600 calories ( males) each day.

The Alternate Day Diet did not appeal to Mosley so he opted for the 5:2 diet. At the start of the program tests showed that Mosley had a high percentage of body fat, high triglycerides, high LDL cholesterol, high IGF-1 and could be heading to an early grave.

After being on the diet for 5 weeks he lost almost a stone ( 14 lbs) in weight and his glucose levels, IGF-1 and bad cholesterol had all reduced together with his risk of heart disease, diabetes and cancer.

While researchers say that it will take a lot more studies to fully determine the body’s reaction to fasting and its effect on human health Dr Colbert, board certified in an anti-aging medicine, states that short term detox fasting will strengthen the immune system and help you live longer.

Previous Post: « 5 Über Detox Foods You Can Eat All Summer
Next Post: Healthy Snack Recipe Ideas For Your Detox Diet »