Will you be grabbing a charcoal detox juice this year or will you give this one a miss?

If you’re into green smoothies and juices you are probably used to adding whey protein, chia seeds, hemp hearts and green superfood but you might not have tried the latest trend of adding charcoal to your detox drinks.

Fans of green cleansing juices are now apparently dropping green juices in favor of black juices. Charcoal is being added to juices containing lemons, spinach, kale, parsley, celery and apples with claims that they can improve your skin, digestion, and organ function

The charcoal makes the juice look black so it can be a bit off-putting even though people are saying the juices don’t taste any different from regular green juices although the texture can be a bit gritty.

Update: Since I wrote this charcoal  has caught the imagination of food manufacturers and chefs who are putting it in burger buns, pizza bases, macaroons, noodles, crispbreads and even ice-cream!

What is activated charcoal?

Activated charcoal is basically carbon, usually from coconut shells or bamboo, that’s been processed to make it a highly adsorbing agent. I do mean adsorbing and not absorbing. It can apparently attract and hold on to thousands of times its own weight in harmful substances which is not the same as absorbing.

Activated charcoal is commonly used in emergency rooms to adsorb drugs in cases of overdose.

Because of it’s adsorptive powers it is sold in capsules or tablets to calm the gut as it can adsorb gases and toxins. Activated carbon is not absorbed into your body but passes through your digestive tract mopping up toxins as it goes. Be prepared for black stools if you take it!

It has been used by health practitoners for many years as an intestinal cleanser to help with the removal of heavy metals and chemicals.

According to Dr.Al Sears, a prominant American natural health expert, who uses it with his patients for detoxifying heavy metals, “one gram of it, an amount the size of your fingernail, can absorb enough toxins to fill the square footage of four tennis courts.”

Now several innovative juice companies have launched activated charcoal detox drinks. Last November Juice Generation, a popular juice and smoothie bar in New York, launched three raw activated charcoal juices. One is a greens blend, one has an almond and hemp protein base, and another is a “lemonade” with lemon, lime, and agave.

Will charcoal juice drinks detox you?

As you might imagine the amount of charcoal added to the commercial juices is relatively low. There is about two teaspoons in Juice Generation’s 16-ounce container.

Dr Al Sears says he takes a heaping tablespoon in the mornings, well before breakfast for general detoxification.

Naturopaths Peter Bennet and Stephen Barrie, authors of the 7 Day Detox Miracle, recommend taking it to help bind up toxins in the intestines that have been processed by the liver and dumped into the bile to prevent them being reabsorbed.

For this reason it can be good to take when you are following any detox program.  According to them activated charcoal holds onto toxins more effectively than any other substance.

What about the juice makers claims for improving skin? Many skin problems have been linked to gut problems so improving your skin by drinking charcoal detox juices is not such a stretch. Bernard Jensen, in his book Tissue Cleansing Through Bowel Management, describes cases where skin problems could be vastly improved, if not cured, through colon cleansing.

Does activated charcoal bind up nutrients?

Some doctors and nutritionists have said there is no research on the effectiveness of drinking these charcoal detox juices but there is no point in drinking them as they will bind up the nutrients in the juice.

Charlie Seltzer, an internist and weight loss expert said “This one is stupid even for stupid juice cleanse people. This is ridiculous on steroids.” Well he’s entitled to is opinion!  I wonder what people who turned their health around with juicing or lost weight would have to say about that remark?

According to several reliable sources nutrients will not be affected.

David O. Cooney in his book Activated Charcoal says that charcoal added to the diet of sheep for six months did not cause a loss of nutrients, as compared with sheep not receiving charcoal.

Activated charcoal carries a slight electro-positive charge that helps it to attract negatively charged substances. Most major minerals carry a positive charge so that is perhaps why it does not attract them.

If you are going to take charcoal it’s better to take it an hour or two away from food simply because food will hamper it’s detoxification ability. You should certainly not take it anywhere near the time you take medications as it could interfere with their absorption.

If you want to give charcoal a try you can add it to any smoothie you like but here’s a green smoothie recipe to start you off: 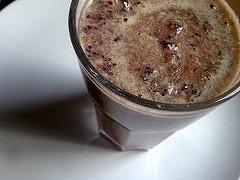 Place all the ingredients into a high powered blender adding enough liquid for the blades to turn and whizz up until very smooth. Add more liquid to adjust the consistency to your preference.

* If you don’t have a high powered blender then the flaxseeds may not get blended well enough. In this case it’s best to grind them up first in a little coffee grinder.

Have you tried any of these activated charcoal detox drinks yet?  What do you think?  Tell me in the Comments section below.