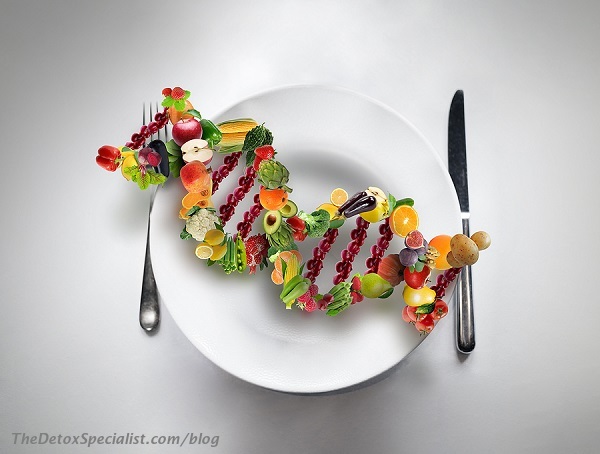 Do you believe that your genes are your destiny? If you do then you are not alone because many people believe that. But, luckily that is not the case.

Genes can be switched on and off by food, chemicals and your lifestyle. As Jeff Bland, the amazing nutritional biochemist, said 25% is your genes and 75% is what you do to them.

By looking at your genes with a genetic DNA test we can see what you’ve been handed by your parents and we can learn a lot more about why you’ve got certain symptoms and perhaps have had problems solving health issues.

We can also understand more about what we can do with diet and nutritional supplements to help support the areas impacted by your genes.

Practically all the foods you eat contain molecules which can have an direct or indirect effect on the risk of developing illnesses by acting on your DNA.

Food influences the way your genes are expressed (switched on) and can modify them, sometimes dramatically, with significant consequences for health, both positive and negative.

Nutrition is no longer just about calories and nutrients, but a tool to lead genetic makeup in a specific direction.

Due to a person’s genetic makeup a certain food or nutritional supplement may have a very different effect on one person than it has on another.

Genetic researchers from the Norwegian University of Science and Technology (NTNU) fed slightly overweight people different diets, and studied the effect of this on gene expression.

Gene expression refers to the process where information from a gene’s DNA sequence is translated into a substance, like a protein, for example, that is used in a cell’s structure or function.

Berit Johansen, a professor of biology at NTNU, stated: “We have found that a diet with 65% carbohydrates, which often is what the average Norwegian eats in some meals, causes a number of classes of genes to work overtime,”
“This affects not only the genes that cause inflammation in the body, which was what we originally wanted to study, but also genes associated with development of cardiovascular disease, some cancers, dementia, and type 2 diabetes – all the major lifestyle-related diseases”.

Diet is the key to controlling our personal genetic susceptibility to disease. In choosing what we eat, we choose whether we will provide our genes the weapons that cause disease or weapons that lead to health.

If you are struggling to get to the bottom of some health issues and have already had a 23AndMe DNA test (either the ancestry or the health one) done then we can take a look at it together and make sense of your symptoms. From that I can devise a food and supplement plan that could be the key to solving your current health challenges and improving your health.

You can read more about me and what a nutritional consultation can involve on this page.

Contact me for a free 15 minute initial consultation at sandyhealthcoaching@virginmedia.com