Dropping the habit for a problem drinker is much easier said than done. But with some key knowledge, the process can be a whole lot easier than you might think. That knowledge is in understanding that it’s often the metabolic leftovers from alcohol consumption trapped in the body that cause cravings. Therefore, the key to quit a physically addictive behavior, like excessive drinking, is in detoxifying the body to rid the body of the molecules that cause the cravings. It’s actually the reason that alcohol detox centers are used, but these centers regularly use drugs to detoxify the body. But, natural detoxification methods are also available, and they can be more effective because they don’t pollute the body with drugs during the detoxification process.

Natural detoxification methods, like colon detox and liver cleansing, are ways to remove stores of toxins and accumulated wastes from the body. These protocols, combined with a healthy, naturally-oriented diet and large doses b-vitamins (which are often depleted in those with drinking problems), drinking problems can be much easier to kick.

Deep detoxification can also help with other physically addictive behaviors, especially smoking and drug use, and for the same reason. It’s because the leftovers from these substances that remain trapped inside the body that often cause the cravings. And when you cleanse those leftovers from the body with natural detoxification methods, the cravings often disappear too. 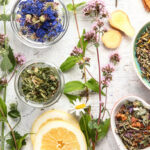