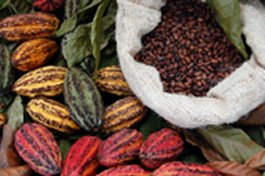 After years of hearing that chocolate is bad for you all we hear is now is how good it is for you.  It’s only dark chocolate though that is suddenly being hailed as the latest superfood. But I was astounded recently to hear that a particular healthy chocolate could detox you!

When I contacted the people who were saying this I discovered that it is not the chocolate itself but the Acai berry juice that it is sweetened with that is a detoxifier.  Oh, really?

I have to explain that this particular raw cacao is sweetened with raw cane juice crystals, blueberry and Acai berry juice. It’s sold in tiny squares and the makers recommend that you take 3 squares a day for it’s benefits.

I have already gone into the whole Acai berry detox diet scam in another post so I won’t go into it all again here except to say that I can find no evidence that it can detox you. Acai berries are high in antioxidants which are needed in the body to mop up free radicals that are created by the
detox process. But to say they can detox you is completely misleading.

There is no doubt that there has been a lot of research on chocolate and there are reports that it is good for your heart, may lower blood pressure and bad cholesterol (LDL).  It’s a bit worrying that a lot of the research is funded by Mars, the company that makes CocoaVia, being promoted
as a healthy chocolate. Makes you wonder doesn’t it?

Epicatechins are good for your heart

It’s fact that dark chocolate is high in epicatechin, a flavonoid which can keep cholesterol from gathering in blood vessels, reduce the risk of blood clots, and slow down the immune responses that lead to clogged arteries.

Epicatechin, triggers blood vessels to release nitric oxide, which relaxes nearby muscle fibers, allowing the arteries to expand and carry more blood. Beet juice has the same effect and I wrote an article about that on my Natural Remedies Blog.

The makers of raw chocolate point out that standard chocolate manufacturing destroys up to half of the flavonoids but it seems that some chocolate companies have now learned to make dark chocolate that keeps up to 95% of its flavonoids. You cannot rely on the fact that it says dark
chocolate on the label.

One researcher found that a chocolate bar with most of its healthy flavonoids stripped away had no effect on blood vessels.  Flavonoids are powerful plant chemicals that can be found in many vegetables,  fruit red wine and tea. Cocoa contains almost twice the flavonoids as red wine and
nearly three times the amount found in green tea. They can have a powerful effect on cell health.

Chocolate is stimulating and addictive

If you are a chocoholic you can now tell yourself that raw chocolate is as good for you as a plate of vegetables, but is it? Chocolate contains over 350 different chemicals and and raw cacao contain significant levels of theobromine, theophylline, caffeine and phenylethlamine.

Theobromine and caffeine are naturally occurring stimulants. Phenylethlamine generates a feeling of contentment and wellbeing but a short period of emotional high is followed by a period of emotional low causing cravings for more. Chocolate can lead to addiction for some because of the rush they get from the stimulants and the “feel good” chemicals.

You rarely find people who are addicted to salads, green vegetables or blueberries which are all high in antioxidants. The difference is that they don’t contain alkaloids. Many alkaloids are toxic and often have pharmacological  effects. Some people will not be affected by the alkaloids in chocolate and raw cacao but there others who will.

Chocolate contains tyramine that trigger migraines and nausea in some and can trigger release of histamine which is bad news for people on a low histamine diet for slow diamine oxidase enzyme activity.

Is healthy chocolate a superfood?

To my mind a superfood is a nourishing plant that contains high levels of essential  minerals and vitamins that does no harm. It certainly does not contain strong alkaloids.  It’s been pointed out that chocolate tastes very bitter in its raw unprocessed form and is not a staple food.  Anything
that is bitter or strong tasting would be nature’s way of telling us that this is a powerful plant or medicine.

While researching this article I came across some healthy chocolate that is being released soon that contains zeolite, a substance that detoxes heavy metals. I will have to look at this in more in more detail but for now I have to say that raw chocolate can be a tasty treat if taken in moderation
but the answer to  “Can Chocolate form part of a Detox Diet” is NO.

Previous Post: « 3 Day Detox Diet – Get Back In Touch With How Good You Can Feel
Next Post: Detox Tips – Practical Tips to Improve Detox »