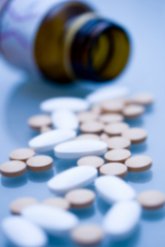 The death of Michael Jackson has highlighted the problem of toxicity of the drugs that people regularly take without a thought about the impact on their livers or immune systems.

Many people regularly take over the counter (OTC) drugs like aspirin, ibuprofen or acetaminophen, the main ingredient in Tylenol, (known as paracetamol or Panadol in the UK)  for colds or aches and pains without being aware of the dangers.

Researchers have found that 8 million people (28% of all admissions) are hospitalized each year for conditions caused by prescription drugs. A frightening thought.

The liver converts drugs in a two step process called Phase 1 and Phase 2 pathways into substances that can be more easily excreted in the urine.

For most drugs the liver uses the route that will get rid of the chemical as rapidly and safely as possible. But in cases where the preferred pathway is not working efficiently often other pathways can be used with the danger that it is not eliminated so quickly or efficiently. The result here is that toxin stays in the system longer, may get turned into a more toxic form or may not get completely detoxified so it can cause damage to health.

Acetaminophen (paracetamol) goes through several pathways which normally poses no problems if the person’s detox system is working efficiently and the drug is safely excreted. But if the Phase 2 pathway is not working as it should then the intermediate substance produced when it went through Phase 1 pathway builds up.

It then gets recycled through the Phase 1 pathway a second time where it becomes more toxic and can damage the liver. The danger lies in not enough glutathione being available to enable this dangerous toxin to be neutralized.

Acetaminophen is the number one cause of drug-induced acute liver failure in the United States. According to Dr Leo Galland there are people who develop liver disease from taking as little as 8 x 500 mg pills in a 24 hour period. Glutathione is plentiful in diets high in fruit and vegetables.

Aspirin inhibits the Phase 2 detox pathway known as glucoronidation where glucoronic acid is attached to the toxin.  Many prescribed drugs, hormones and food additives are detoxified through this route.

An irresponsible report in the The Daily Telegraph recently stated that an aspirin a day could help prevent liver damage caused by obesity, heavy drinking and drug use adding that “millions of people susceptible to liver problems could have their lives prolonged by the painkiller”.

The claims were based on a a study in mice found that aspirin lessened the damage caused by paracetamol overdose. Paracetamol overdose is entirely different from the fatty changes in the liver from alcohol or obesity and the NHS Knowledge Service states that “The results of this study do not suggest  that people should start regularly taking aspirin in the hope of warding off liver damage”.

Non steroidal anti-inflammatory drugs (NSAID’s) like Diclofenac (Voltaren), inhibit the Phase 2 pathway known as sulfation (sulphation) and have been frequently associated with liver injury. A newer class of NAID’s called COX-2 inhibitors have been associated with some liver dysfunction.

Vioxx and Bextra have been withdrawn from the market due to heart related problems leaving  Celebrex as the commonly prescribed COX-2 inhibitor for arthritis.

Benzodiazepines (Librium, Valium, Prozac) frequently prescribed for anxiety and insomnia suppress Phase 1 detox in both the liver and the brain. Consequently elderly folk may get neurological problems because the liver is slow at breaking down the neurotransmitters that should be eliminated before they build up and become toxic.

The liver detox pathways are adversely affected by a number of things including lack of specific nutrients, poor diet, excess alcohol, excess caffeine, toxins absorbed from the intestinal tract, certain prescription drugs and a genetic tendency.

Detox pathways can be improved

You can learn more about your liver detox through the Detoxification Profile through Genova Diagnostics and Genova Europe.  You can find a health practitioner in your area on their website.

Previous Post: « How can Hair Mineral Analysis help you Detox and Improve your Health?
Next Post: Why Use Herbs to Detoxify Your Body? »