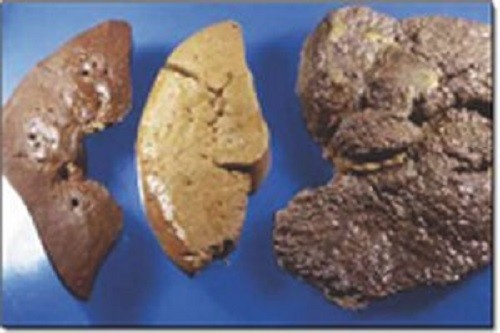 The term fatty liver disease covers a range of conditions where there is a build-up of fat in the liver cells and liver spaces. It is usually associated with obesity but may be caused by diabetes, alcohol excess, certain drugs, rapid weight loss or poor dietary choices.

Fatty liver is very common and the only treatment usually recommended by doctors is a low glycemic diet and exercise.  This diet consists of whole grains, whole fruit and vegetables which of course are the same foods eaten on most liver cleansing diets.

Fatty liver is diagnosed in about 1 in 4 people in the US and is often found during routine blood testing for routine check ups or other problems. A fatty liver rarely causes symptoms itself in the early stages although it can become enlarged and may cause some discomfort over or just below the ribs on the right side.  A liver cleansing diet can soon ease this.

Fat is normally stored in the fat cells elsewhere in the body and not in liver cells and spaces so there is some disruption in the way the liver cells handle fat.

If you have been diagnosed with fatty liver your liver is in fact slowly suffocating with fat. The blood normally flows through the spaces in the liver so once they become clogged with fat your liver can no longer adequately cleanse or detoxify your blood of toxins nor burn fat efficiently.

Chemical toxins may build up in your liver so regular liver cleansing or detoxification is essential.

Some drugs such as tamoxifen (used in cases of  breast cancer), tetracycline (an antibiotic), long term use of steroids and the contraceptive pill can contribute to the condition. Alcoholic fatty liver is caused by an overindulgence in alcohol. When a fatty liver is associated with liver inflammation it is called Steatohepatitis. All these conditions can be improved with a liver cleansing diet.

The majority of people diagnosed with what is called simple fatty liver disease are overweight and eat the wrong foods. Some research showed that mice fed on high glycemic carbohydrates had twice the amount of fat in their blood and livers than mice fed on low glycemic foods. Why is this? Excess glucose in the blood that cannot be used for energy is turned into fat.

What are glycemic foods?

Different carbohydrate foods can have different effects on the body. Some are absorbed quickly into the blood stream and cause a rise in blood sugar (glucose) levels triggering insulin production. Others are absorbed slowly and do not have much impact on blood sugar levels.  The foods that have been studied have been given a  number on a scale of 1 to 100 called the Glycemic Index (GI). The carbohydrate foods with an index of 55 or lower are the ones that are the key to stable blood sugar levels and long term health. These are the ones on a liver cleansing diet.

The high GI foods are foods mainly foods that have had the fiber removed by processing like white flour, white rice, most breakfast cereals, products that contain sugar.   Foods that are in their natural state such as whole grains, whole fruits and vegetables are low on the GI. These are the foods that are included on the liver cleansing diet.

To understand the effect of food on blood sugar even more the glycemic load (GL) was introduced. This takes into account the amount of carbohydrate in a given food. For example the GI for water melon is high but because the carbohydrate content is low the GL is low. Many health advisers recommend a diet based on the glycemic load as the best way to control or lose weight to reverse fatty liver.

The only problems with these lists is that not all foods have been tested and not all foods on the lists are healthy choices. The GI does not take into account the effect if other foods are eaten at the same time. For example the addition of foods that contain fiber, fat and protein will reduce the GI of the meal. Different people digest carbohydrates at different rates.

Be sure to include liver cleansing raw greens like baby spinach, watercress, Romaine lettuce, orange and red colored fruit and vegetables and vegetables that support liver detox – broccoli, cabbage, Brussels sprouts, cauliflower, kale, rutabaga (swede).  Dairy products should be excluded. You can use soy, almond or rice milk on cereal instead.

Snacks can be a choice of a fresh vegetable juice sweetened with some apple juice or try a green smoothie (try to have more greens than fruit), raw veg sticks, a few almonds, a handful of seeds and raisins, a rice or oatcake spread with avocado or hummus.

Green smoothies in the mornings with fresh fruit later if you are hungry is good.  If you get very hungry you probably need a protein/carb combination breakfast. Try sugar free muesli (wheat free is best) with soy, almond or rice milk or cooked oatmeal. Add some freshly ground mixed seeds such as flaxseed, sunflower and pumpkin.

The magic nutrient that prevents fat build up in the liver

Carnitine, a vitamin like substance, helps the liver convert the  fatty acid build up into energy. You get carnitine from your diet and it can be made in the body. Excess alcohol consumption, exposure to chemicals and heavy exercise deplete it and sodium benzoate, a common food preservative, interferes with its manufacture.

A dose of 250 mg carnitine twice a day together with a B complex that contains 500 mg choline and 25 mg of the B vitamins can help reverse fatty liver disease in addition to the liver cleansing diet.

The herb Milk thistle (Silybum marinarum) is best know for its protective and regenerative effect on the liver. It stimulates the production of new liver cells.

For more information on the liver cleansing detox diet see my previous article:

How a Liver Detox Diet can Restore your Health

Previous Post: « How A Liver Detox Diet Can Restore Your Health
Next Post: How Improving Liver Detox may help Prevent Alzheimer’s Disease »