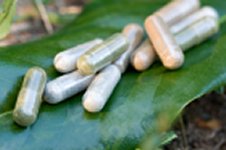 The experiences of many Candida sufferers have shown that conventional anti-fungal drugs have only very short term benefits and symptoms returned soon after they were discontinued. Anti-fungal drugs like Nystatin, Nizarol (ketoconazole),Sporanox (itraconazole) and Diflucan (fluconazole) caused the most side effects. A cocktail of natural anti-fungals seemed to work the best and had the most lasting effects.

With any conditions like Candida overgrowth, bacterial fermentation or food intolerance the liver is  is likely to be under pressure. Toxins that come directly from the bowel as well as toxins produced by Candida and bacterial fermentation overload the detox pathways. Some of the anti-fungal drugs that are prescribed by doctors cause liver and kidney damage so have to be
carefully monitored. Anti-fungal drugs may kill the yeast on contact but they do not seem to get to the root of the problem.

When treating Candida overgrowth naturally there are a number of areas to consider such as diet, improving digestion, bowel cleansing, heavy metal and general body detox, gut healing, balancing hormones, replenishing good gut bacteria, rectifying nutrient deficiencies and improving immune
system function. I have previously written several articles that begin to address some of these:

What you need to know about intestinal Candida yeast overgrowth

Candida – Get back to basics to treat Intestinal Candida Naturally

Detox mercury if you want to cure Candida for good

Fortunately there are numerous natural substances that have anti-fungal properties. As with any anti-fungal treatment you may experience a die off reaction. This happens when you kill the yeast too quickly and your body is overwhelmed with the toxins and yeast cells.

This Herxheimer reaction can be avoided if you spend a month on the anti-Candida diet or the blood sugar control diet before starting the natural anti-fungals and begin with a low dose before building up gradually to the full dose. Making sure you take extra fiber or Bentonite clay can help take the toxins out of your body before they are absorbed.

This is avoided by using a product that contains a number of different anti-fungal substances or rotating the single ones every month. Some practitioners say that you can stay on one for up to three months.

Let’s look at some of the most commonly used natural anti-fungals for intestinal Candida overgrowth.

Caprylic acid is a naturally occurring fatty acid that is found in coconuts and palm kernals and is toxic to yeast. Many nutritionists and natural health practitioners use this as a natural anti-fungal to control yeast.

Because fatty acids are easily absorbed from the stomach and intestines and would not get down to the lower intestinal tract, commercial products are enteric coated or formulated to be slow release so they get into the parts of the gut where it is needed.

The dose is from 300 mg to 1200mg a day. It’s best to start on the low dose and very gradually work up to the high dose.

Some practitioners recommend a Candida Cleanse using a combination of Psyllium Husk powder, Bentonite liquid or powder and liquid caprylic acid (Caproyl) that was popularised by S. Colet Lahoz, RN.

Use about 1 teaspoon of powdered Psyllium husks, 1 -2 tablesppon Bentonite and 1 teaspoon – 1 tablespoon of liquid caprylic acid to 8 oz of filtered water for each drink. Put all the ingredients into a lidded container and shake well before drinking immediately. Lahoz recommend using this
cleanse drink twice a day for a minimum of 3 months while following the Anti-Candida Diet.

Read more about this cleanse in this article:  Candida Detox

Anise seeds (aniseed) used as a spice throughout the world and as a folk medicine in South America has moderate anti-fungal activity. Combined with Horopita it increases it’s anti-fungal effects 32 times. The product containing these two herbs produced by Forest Herbs is known as Kolorex.

One New Zealand study showed that people diagnosed with intestinal Candida found Kolorex more effective than other treatments they had tried and had a 76% reduction in symptoms.

The usual dose is 1 twice a day but as usual you should start off with 1 a day for a week before increasing to 2 if you have no die off reactions.

Grapefruit seed extract (GSE) or Citrus seed extract as it’s sometimes known is highly active against yeast and bacteria, some viruses and parasities.  It is obtained from the seeds, pulp, and white membranes of grapefruit. According to many holistic physicians and thousands of their patients grapefruit seed extract is one of the best non toxic supplements for treating intestinal Candida overgrowth.

Dr. Leo Galland, a renowned Integrated Medicine doctor and board certified internist, who prescribes grapefruit seed extract for chronic Candidiasis has reported treatment failure in only two out of 297 cases. He considers it to be a major therapeutic breakthrough for patients with chronic parasitic and yeast infections.

A 1990 study found that grapefruit seed extract performed as well or better than 30 antibiotics and 18 fungicides. The good thing about it is that it does not appear to have any adverse effect the good bacteria in the gut nor does it result in resistance.

The extract usually comes as a liquid concentrate or in capsules and goes under various trade names. The advantage of the liquid is that you can start with one drop a day and increase it very gradually to avoid any excessive die off reactions.

Typically a full dose is 10–12 drops in 6–7 ounces of water three times daily. It is very bitter though and some people don’t like the taste. In this case capsules are better. The usual dose is 100–250 mg one to three times daily. You should not take it if you are allergic or sensitive to citrus.

There are numerous natural substances that have anti-fungal properties and are used to treat intestinal Candida overgrowth and we will look at some more anti-fungal treatments in Part 2 of this article.