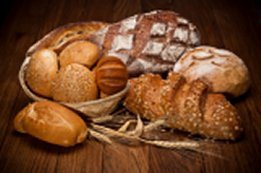 According to magazine and newspaper reports this year’s celebrity fad diet is going gluten free.  While many people have been avoiding gluten as part of a detox diet for years it seems that celebrities Gwyneth Paltrow, Rachel Weisz, Jenny McCarthy and Victoria Beckham are following a gluten free diet to help them lose weight and give them more energy. But dietitians are warning that giving up gluten products could actually make you fat and tired.

Many experts are warning that cutting gluten out of your diet to lose weight could actually make you feel fatigued, give you headaches and cause lack of nutrients as well as making you put on weight. How can this be when so many people swear how much better they feel when they avoid gluten products?

Gluten free products are high in fat and sugar

It’s not just this year’s fad though. You may have noticed that food manufacturers have gradually been putting more and more gluten free products on supermarket shelves over the past few years. And there lays one of the problems. The gluten free products that they produce are often high in fat, sugar or salt  to try to make them more tasty.

If you simply replace the foods containing gluten with these high calorie gluten free versions you may end up putting on weight. Dietitians also warn that cutting out a major food group like bread can lead to a lack of calcium, B vitamins, iron, fiber, a lack of energy and headaches due to the lack of carbohydrate.

So what is gluten and should you cut it out or not?

Gluten is composed of two proteins called gliadin and glutenin which as many as one in three people may be sensitive to. Gluten is found in wheat, rye and barley. Oats contain avenin which is very similar to gliadin but can often be tolerated by many people who react to the other gluten grains. The proteins in rice and maize are often referred to as glutens but they do not contain gliadin and people with gluten intolerance usually have no problem with them.

Avoiding gluten, or more correctly the gliadin in gluten, has become a necessity for more and more people who have been diagnosed with celiac disease. They have an serious immune system reaction to gluten which triggers an attack on the gut lining. Doctors are concerned that many people are avoiding wheat when they are not really allergic to it at all.

However, many doctors who practice functional or alternative medicine believe that food intolerance or sensitivity that does not show up as a true allergy on conventional tests does exist. There are many people who will testify that they feel so much better if they avoid gluten and it is not just imagined.

Wheat is probably one of the most frequently consumed foods. Many people eat wheat three times a day virtually every day.  Wheat cereal for breakfast, a sandwich for lunch, pasta or pizza for dinner with snacks of pretzels, muffins, cakes and cookies in between.

In terms of evolution wheat is a relatively new food for the human race. Ancient man, the hunter gatherers, lived on meat, fish, wild vegetables, fruit, nuts and seeds. It was not until the agricultural period that began about 12,000 years ago that wheat and other grains were introduced.

Some argue that we have not yet adapted to eating grains and genetic testing has discovered that this is possibly true. Researchers have detected gliadin, the principle type of wheat gluten, in the blood of 15% of people they tested. And according to Coeliac UK, (that’s how we spell it),  celiac disease is hugely under diagnosed. They say that research shows that only about 15 % of people affected are aware of the cause of their symptoms.

Some researchers in Sweden reported that rheumatoid arthritis patients who skip both animal products and gluten grains could reduce their risk of having a heart attack or stroke. Gluten intolerance has also been linked to Autism. Actress Jenny McCarthy went on a gluten free diet several years ago when she tried the gluten and casein free diet for her autistic son.

Wheat is hard to digest

There is no doubt that wheat is very hard to digest. Wheat flour is composed of a starch core surrounded by a network or gluten protein. When this is not fully digested and absorbed the starch is fermented by intestinal bacteria causing gas, bloating and in some cases diarrhea.

Cutting out gluten products in this case may result in a reduction of symptoms whether the person has celiac disease or not. So I think that it’s very likely that many people feel better when they avoid wheat for this reason.

Cutting out gluten for detox

Most detox diets and bowel cleanses exclude gluten grains because they are hard to digest and wheat is very acid forming. It’s best to  eat foods that are alkaline forming, light and easy on your digestive system. It is also believed that because gluten is such a gooey substance that you can cleanse your bowels more easily. If you have a leaky gut it is vital to cut out gluten grains as part of the protocol to heal it

When cutting out one food group you can avoid the lack of nutrients, carbohydrate and fiber by replacing it with healthy alternatives like brown rice, quinoa, millet, amaranth, buckwheat, gram flour (garbanzo or chickpea flour) and maize. Going gluten free can be difficult but worth it if you feel better. Just remember to avoid the high fat and sugar alternatives if you don’t want to get fat.