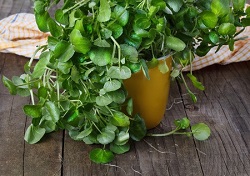 Watercress is probably not the first thing you would think of as one of the best detox foods for body cleansing but according to research it is one of the healthiest foods on the planet.

Researchers recently tested 47 different types of fruit and vegetables for their levels of 17 nutrients considered to be important to our health and surprisingly watercress came out top.

Watercress is one of the oldest known leaf vegetables consumed by humans. It’s said that Hippocrates grew wild watercress in the natural springs and used it to treat blood disorders at his first hospital.

Watercress soup, became very popular in the 17th century when it was claimed to cleanse the blood. This is probably because the peppery tasting leaves are packed with many nutrients vital for the detox system, including several B vitamins, zinc, potassium, vitamin E , vitamin C and antioxidants.

It is also classified as a cruciferous veg which means it can boost your detox system so is one of the best detox foods for body cleansing. Cruciferous veg contain phytochemicals that can stimulate enzymes in the body that detoxify cancer causing chemicals before they damage cells.

It is even claimed that it can help prevent lung diseases, such as emphysema and cancer. This is because watercress contains gluconasturtin, a substance only released when the leaves are chopped or chewed, which helps neutralize a carcinogen in tobacco.

Liz Hurley is said to drink a cup of watercress soup every time she gets hunger pangs when she is cutting down on food. It’s been reported that she followed the watercress soup diet at one time which is supposed to help you lose 10 lbs in seven days.

The watercress soup diet worked mainly because it limits calories but the watercress would also have helped with body cleansing and detoxing chemicals that interfere with the weight control system and keep you fat.

The watercress soup recipe used for that diet contains milk so is no good for body cleansing detox diet as you should avoid milk. It also calls for white potato which can raise blood sugar levels as it is high on the glycemic index. This recipe uses sweet potato which is much lower on the GI scale.

Here’s a Watercress soup recipe that is good for body cleansing.

Heat the oil in a large saucepan and gently sauté the onions until soft.
Add the cubes of potatoes, stir to coat and cook for 5 minutes
Add the stock and stir well.
Bring to boil, cover and simmer for 10 – 15 minutes, or until potatoes are cooked.
Add the watercress, and stir in until it has just about wilted.
Allow to cool enough to put into a blender. Do it in batches if necessary.
Put back in pan, add the salt and pepper to taste and heat through until it starts to bubble.
Add chopped chives if using.

If you like the peppery taste of watercress try this spicy soup recipe. 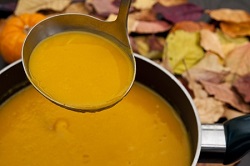 Heat the oil in a large pan, add the onion and sauté for 2 mins.
Add the squash, stir well then cover with a lid. Cook gently for 2 mins.
Stir in the chili flakes and stock, then bring to the boil.
Cover and simmer for 20 mins or until the butternut squash is tender.
Remove from heat and When cool enough transfer to a blender and whizz until smooth.
Return the soup to the saucepan and add the watercress.
Season to taste.
Gently reheat before serving

Here’s an unusual recipe for a Watercress Salad wrap.

Blend the first 7 ingredients together in a food processor or blender until smooth.
Fold in remaining ingredients
Carefully place in corn tortillas or gluten and sugar free wraps or large lettuce leaves and fold up.

Another good body cleansing recipe is this Watercress Detox Smoothie

Put all ingredients into the blender with the frozen ingredients on top and whizz up until very smooth.

So, don’t forget to add a handful of superfood watercress to your smoothies, juices, salads and soups when you next follow a body cleansing diet.

Previous Post: « How To Double Your Detox And Weight Loss
Next Post: Best Body Cleanse For A Fall Energy Boost »