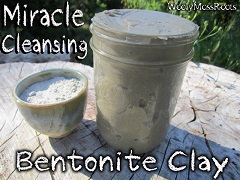 The journalists are at it again with their scare tactics. Headlines in my newspaper say women using Bentonite clay detox drinks to lose weight are risking kidney failure, perforated intestines and even death.

Wow! Pretty strong claims don’t you think? The only problem is they don’t back them up with any evidence.

Actress Zoe Kravitz apparently did a Bentonite Clay cleanse to lose weight to play an anorexic in The Road Within. ” I ended up drinking clay because it cleans out your body and fills you up”.

So, are these people dicing with death?

In 2009 UK’s Food Standards Agency (FSA) put out a warning to consumers that dangerously high levels of lead and arsenic were discovered in clay based detox products being distributed by online retailers.

The newspaper article goes on to explain that arsenic can can trigger kidney damage, nerve damage, skin, lung and bladder cancer while lead in the body can lead to anaemia, brain damage and liver failure.

They state that there have been reports of clay cleanses causing bowel perforations, kidney and heart failure as it disrupts potassium levels in the body but they fail to cite any referrences.

It’s true that you can lose potassium from the GI tract if you have diarrhea or from excessive laxative use. A Google search does not bring up any stories of people dying from doing a Bentonite clay detox.

I find it hard to believe because various clays have been used by primitive people for cleansing for hundreds of years. Internal use of volcanic ash goes back to the indigenous peoples of the high Andes Mountains, tribes in Central Africa, and the Aborigines of Australia.

A 2005 study at the Department of Environmental Toxicology and The Institute of Environmental and Human Health at Texas Tech University in Lubbock tested 50 volunteers over a two-week period, giving the volunteers different amounts of a natural clay supplement.

Researchers tested blood and urine levels and concluded that products containing the clay were “relatively safe” for human consumption.

How does Bentonite detox you?

The power of Bentonite, a name given to a particular clay composed of weathered and aged volcanic ash that was originally found in Fort Benton, Eastern Wyoming, lies in it’s adsorptive properties.

The detoxification powers of clay come from a combination of the large amount of surface area and it’s highly negative electromagnetic charge.

Toxins are positively charged so the clay acts like a magnet, drawing toxins in the gut to it. Things like viruses, parasites, pesticides, herbicides, heavy metals, and radio active substances can be drawn out by the clay.

It’s because of this strong magnetic charge that I find it hard to believe that any lead or arsenic in the clay could be absorbed into the body. Any toxic metals in the clay would remain tightly attached.

If you don’t want to take a chance then look for purified Bentonite. Contact the manufacturer of any colon cleanse product that contains Bentonite and ask if it has been tested for lead or arsenic.

Dr Emmanuel states “Bowel perforations can occur because the bowel may contract and perforate against a blocking lump in the gut.”

Bentonite clay could bung you up if you take it on it’s own but the best way to use it is to combine it with psyllium husks and plenty of water. That way it will keep moving through you.

How to make a Bentonite Clay Detox Drink

Just put 1 tbsp liquid Bentonite and 1 tbsp Psyllium Husks or 1 tsp Psyllium husk powder into a container that has a lid. Add 8 oz water or diluted juice, put on the lid and shake it up well to mix. This is known as a P & B shake.

Drink the shake straight away before it gels. Always drink it on an empty stomach and don’t eat for a hour afterwards. Don’t forget to drink plenty of water during the day while you are doing the cleanse.

Here’s a wonderful infographic all about Bentonite that I found.

Have you ever tried a Bentonite Clay Detox? Ever used it for weight loss? Tell me about your experiences with it in the comments. I would love to hear about them.
If you enjoyed this article don’t forget to share it using the share buttons below so others can benefit from it.