According to recent media reports coconuts are the latest super food. Celebrities are drinking coconut water, adding coconut oil to their diets, and using it as part of a detox diet.  The beauty industry is having a field day using it as a super ingredient in a variety of products.

Health stores have apparently reported a 50% increase in sales of coconut oil in the past year. Manufacturers are falling over themselves to produce the best selling coconut soft drink. So what is all the fuss about?

Coconuts are a healing food

Coconuts, which are actually seeds, have been considered a healing food and have been a staple food of Asian, Indian and Polynesian cultures for centuries. Yet scientists are only just now discovering why they are so potent as super foods.

Coconuts are rich in fiber, vitamins, minerals, amino acids, phytochemicals and healthy fats although there is some controversy about the fats.  The beauty industry is adding coconut oil, milk and water to just about every beauty product you can think of because they are so nourishing,  moisturizing and have anti-bacterial, anti-fungal and anti-viral properties.

Celebrities are using coconut oil to aid weight loss as it can boost metabolism and athletes are using it for instant energy as it is digested quickly. Bruce Fife wrote about the healing properties of Coconut oil 10 years ago and popularized it as a detox or cleanse which I wrote about here:

Many dieters are afraid to eat coconut oil, or butter as it known, because of it’s saturated fat and high calorie content. Experts have been warning us for years against saturated fat because it is supposed to increase cholesterol.

The fats that coconuts contain are known as short chain and medium chain fatty acids. Several studies have shown that these fatty acids are three times more effective at increasing metabolism than long-chain fatty acids ( found in vegetable and most seed oils) so can burn off stored fat. Studies have concluded that coconut oil can help reduce abdominal obesity in people who cook with it regularly.

The fear of coconut oil increasing cholesterol came from a study where animals were fed only hydrogenated coconut oil. They became deficient in fatty acids which caused an increase in cholesterol. Hydrogenated oils are bad news and I have written about them here: Say NO to Toxic Trans Fats if you want to Detox

Other studies on populations who regularly eat coconut oil found that it does not lead to high cholesterol nor to heart disease. You need not worry about eating coconut fat.

You will probably be surprised to know that the theory of high fat foods raising cholesterol and causing a build up in your arteries has never actually been proven. In fact two new studies have proven that high fat foods don’t raise cholesterol levels. 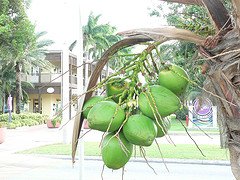 We are more used to seeing mature brown coconuts in our supermarkets but the young green ones are the best ones to get as far as nutrition goes if you can find them. Young coconuts are considered to be one of Nature’s most perfect foods. The delicious jelly like meat of young coconuts can be added to smoothies or made into raw deserts.

Coconut water is the clear liquid found inside young coconuts. Coconut milk is made from pulped coconut meat and water with coconut cream has a higher meat to water ratio.

Coconut water, oil and meat can certainly be part of a healthy diet. Here is a great coconut Green Smoothie recipe to get you started from Incredible Smoothies

Blend altogether in  a powerful blender until very smooth. Enjoy!