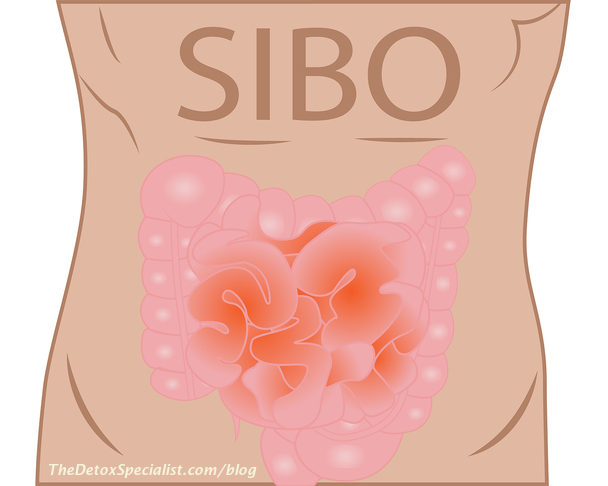 If you think you have intestinal Candida yeast overgrowth and are having a hard time getting it under control you may have SIBO (small intestine bacterial overgrowth).  The symptoms of SIBO aka SBBO (small bowel bacterial overgrowth ) are very similar to those of Candida so it’s easy to confuse the two conditions. It is possible and not uncommon to have both conditions.

Although the entire digestive system is populated with bacteria the small intestine does not contain anywhere near the number of bacteria that is found in the large intestine (colon).

SIBO has been linked to IBS, chronic fatigue syndrome, fibromyalgia, food intolerance, leaky gut, Lyme Disease and environmental illness. A high percentage of IBS sufferers have now been found to have SIBO as the cause of most of their symptoms.

SIBO can cause the following symptoms:

When the condition has been present for some time it can lead to:

As you can see these are the very same symptoms that might make you think you have Candida overgrowth or IBS. In fact it’s known that 80% of people diagnosed with IBS have SIBO.

The bacteria ferment the food in the small intestine which produces gas and toxic substances. The gas causes abdominal bloating and pain. The toxins irritate and damage the intestinal lining causing inflammation, pain, diarrhea and leaky gut.

What is the cause of SIBO?

If the migrating motor complexes (MMC),  a set of wave-like movements that keeps food and bacteria moving between meals and times of fasting,  are not working as they are supposed to then bacteria from the colon and lower end of the small intestine can migrate to the upper parts of the small intestine. It is thought that excessive methane and/or hydrogen gasses produced by overgrowth of bacteria in the gut is linked to decreased MMC function.

Many things can interfere with the MMC such as:

How do you know if you have SIBO?

There is no perfect test for SIBO but the favorite is the 3 hour lactulose hydrogen breath test. It is possible though to have bacterial overgrowth that cannot be detected by this method. Humans can’t digest or absorb lactulose. Most bacteria can and this produces hydrogen and methane which can be measured in the breath. It’s best to make sure that the test includes methane as well as hydrogen because not all test do.

Methane dominant SIBO is also known as IMO ( Intestinal Methanogen Overgrowth). Methanogens are organisms that live in the gut but they are archaea and not bacteria. The most common methanogen is Methanobrevibacter smithii which can be determined by some of the advanced stool tests.

A third type of SIBO has been recognized now and that is hydrogen sulfide SIBO. A new breath test called Trio-Smart is now available which can test for all three types of SIBO.

Mainstream doctors usually treat it with antibiotics but this does not provide a lasting cure and the condition often recurs because the underlying cause has not been addressed. Antibiotics can lead to an overgrowth of Candida yeast. In many cases yeast overgrowth can be present with SIBO and is referred to as SIFO (small intestine fungal overgrowth).

What we eat creates the environment in our digestive system. The beneficial bacteria survive on high fiber but high fiber diets can be a problem for some people with SIBO. Meals that are high in meat and fat and low in fiber tend to encourage the putrefactive bacteria.

A strict diet can help to starve the bacteria. The cleansing, MMC waves, of the small intestine only occur when you are not eating so frequent meals or snacking should be avoided. A prokinetic which stimulates gut motility can help normalize a slow or non-functioning MMC. Ginger can improve motility or there are herbal combinations like Atrantil or nutritional formulations like MotilPro from Pure Encapsulations.

Bowel cleansing can help sweep the bacteria out of the small intestine and herbs can help reduce the bacterial overgrowth.

A supplement of hydrochloric acid (HCL) is often needed with meals to help acidify the stomach and to keep the bacteria down as well as pancreatic enzymes to help digest food.  In some cases liver and gallbladder support is needed as well.

The two diets that are mostly now advised for SIBO are the FODMAP and Bi-Phasic Diets. FODMAP foods are those that contain certain types of carbohydrates that are not easily broken down.  It stands for fermentable oligosaccharides, disaccharides, monosaccharides, and polyols.

Lightly cooked fresh, non starchy vegetables are considered better than raw food initially to calm down the gut. Limit fruit to 1 – 2 servings a day daily and avoid all dried fruit.

Fruit should be eaten on its own or as a snack between meals and not be combined with or eaten after meals as it can encourage fermentation if it sits in the stomach for any length of time.

One serving of fruit can be combined with green leaves to make a very digestible and nutritious green smoothie. Vegetables can be made into nutritious soups. Meat can be cooked slowly as a casserole with vegetables to make it easier to digest. Bone broths can help to supply the nutrients that have become deficient.

Sugar and sweeteners of all kinds should be avoided including dairy products as they contain the hard to digest milk sugar, lactose. Avoid grains & cereals.

It’s best to avoid all processed foods (any packet or tinned foods).  The original foods have been stripped of  most nutrients and contain additives and preservatives that can damage the gut flora.

Use plenty or garlic and fresh ginger both cooked and raw in your food preparation. Ginger contains substances that improves motility of the gut,  may improve digestive enzymes, and has anti-bacterial and antioxidant properties. Garlic is anti-spasmodic and can help with pain, It is also anti-fungal an anti-bacterial and seems to promote the growth of the friendly gut flora.

Some people have found that the SCD (specific carbohydrate diet) or the Gaps Diet (Gut and Psychology Diet) helped them but it can take several years unless you use some herbs as well.

So if you you have been troubled with intestinal candida that seems to defy all treatment it pays to consider SIBO and get tested for it.

Previous Post: « Are Coconuts The Latest Super Food?
Next Post: How To Detox Salt From Your Body »