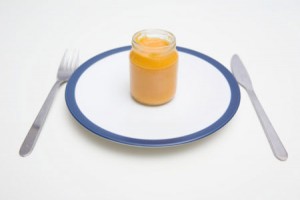 First it was the Blood Group Diet now it’s the Tracy Anderson Baby Food Cleanse Diet that Cheryl Cole is apparently following. While there has been some criticism over the diet it sounds better than the diet cokes, sweets and cookies that Cheryl was reportedly living on before she was hospitalized with a bad case of malaria last year.

The former UK  X Factor judge and Girls Aloud singer is reported to have hired celebrity trainer Tracy Anderson to help shape her body before her hoped for appearance on the American X Factor.

Although Anderson claims her baby food diet is a cleanse diet, celebrities have latched on to it as a way of eating on the run and losing weight.  It’s not all down to the diet though as Anderson also puts her clients through a cardio-dance aerobics and body toning program to help them lose fat and sculpt their bodies.

The Baby Food Diet is very simple. According to Cheryl you replace one or two meals a day and snacks with 14  x 4 oz jars of baby food and eat a light meal such as grilled chicken or fish with green vegetables in the evening . A variation of the plan is to just replace one meal a day or high calorie snacks with the baby food.

The theory is that the puréed baby food served in portion-controlled jars will prevent overeating and keep you satisfied with smaller portions of food.  If you stick to the plan, you should get fewer calories and trigger weight loss.

In one interview Anderson said “I wanted something where you can eliminate toxicity and break bad habits but still have your digestive system going”.

Jennifer Aniston,  who reportedly did the diet about a year ago,  said that the baby food cleanse included fruit smoothies, puréed oatmeal, pears with cinnamon, soups containing dandelion greens and a dinner of lean meats and vegetables.

Eating fresh foods is a lot better than relying on jars of baby food but this is obviously not going to appeal to people who do not have a lot of time to puree their own food or make their own soups and who eat on the run. (Eating on the run as you might imagine is not good).

Advantages and disadvantages of the Baby Food Cleanse Diet

One advantage is that most baby food is free of additives and preservatives, and low in fat, sugar, and salt.  And there is a wide variety to choose from, including organic.

But what does it taste like? Have you ever tasted jars of baby food?  It’s not at all like the food you are used to nor like fresh home made pureed food.

The disadvantage is that chewing food is part of the process that makes you feel full.  Dr. Robert Hackman, Chairman of our Scientific and Medical Advisory Board, advises taking small bites of food and chewing it for a long time.

Another disadvantage could be that the lack of fibre could slow down your system and cause constipation unless you take some other form of fiber. .

The problem with these fad diets is that they are short term crash diets. Whatever weight you lose will come back just as soon as you go back to your regular eating habits.

My advice to Cheryl Cole is to ditch the baby food cleanse in favor of a real detox diet with Green Smoothies and an abundance of  fresh fruits and vegetables that are full of fiber and are much more nutritious and satisfying than baby food.