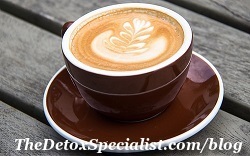 We keep hearing that coffee has many health benefits yet we are told to give it up for detox. Why is that?

If you are confused by the conflicting information that you read about coffee you are not the only one.

On the one hand we have studies that say coffee may protect against Type 2 diabetes, Parkinson’s disease, liver cancer, and liver cirrhosis and lower the risk of death from cardiovascular disease.

Coffee drinking increases homocysteine in the body which is associated with higher risk of heart disease and Alzheimer’s. But moderate consumption of 1–3 cups a day has been linked to a small decrease in risk.

Then, on the other hand, we have a new report saying that drinking more than four cups (the caffeine equivalent of 400 mg) a day may be harmful to health.

The European Food Safety Agency warns that those who break the limits run the risk of a host of health problems ranging from anxiety and sleeplessness to heart rhythm disturbances and heart failure. It’s easy to break the limits if you have other caffeinated drinks.

It can be hard to know how much caffeine you are drinking in a cup of coffee as cup sizes vary so much and some large coffees from high street coffee chains put several shots of expresso in a cup. To give you an example, a large, filter coffee from Starbucks, contains 400mg caffeine in a single cup! How about that?

I think that Dr Rob Van Dam, Assistant Professor in the Department of Nutrition, Harvard School of Public Health has a point. He says that since coffee contains so many different compounds, drinking coffee can lead to very diverse health outcomes. It can be good for some things and bad for some things.

One thing that does not seem to be talked about much is how coffee is detoxified by the liver. The liver detox involves a two step process known as Phase 1 and Phase II performed by a system of enzymes. Studies have shown that the activity of these enzymes vary significantly in people depending on their genetics, the level of toxins they are exposed to and their nutritional status.

One of the tests used to determine how an individual’s Phase 1 detox system is working is to measure how efficiently the person detoxes caffeine. Researchers have discovered that there can be as much as a 5 fold difference in the rates of detoxification in healthy adults.

So, you can see now how some people can tolerate caffeine better than others.

Coffee is heavily sprayed with pesticides

The coffee bean is reputed to be one of the most intensively pesticide sprayed crops in the world. So next time you drink your cup of coffee think about the pesticides that are probably floating around in it! If you are going to drink coffee whether you are doing a detox or not it’s best to buy organic.

If you rely on coffee to get you going in the mornings then you are probably using it to kick start your already weak adrenal glands. Caffeine stimulates your central nervous system which in turn triggers your adrenals to produce adrenaline which puts your body in the “fight-or-flight” state. Great if you are in danger or facing an emergency situation but not what you want for a normal day at the office.

It also stimulates the release of cortisol, the stress hormone, whether you are stressed or not. This can lead to abnormal cortisol concentrations. It could result in cortisol surges at mealtimes, which causes you to overeat. Eventually you could wind up with higher body fat, lower muscle mass, and a reduced metabolism.

If you keep it up your adrenals become exhausted. Your caffeine consumption simply pushes your adrenal glands so much that they burn out.

If you already have a cholesterol problem then clearly drinking coffee made with arabica beans is not going to be good for you. If you use filter papers to make your coffee then that can help to remove some of the kahweol and cafestol but if you percolate your coffee you will get higher levels of it.

While some researchers say that coffee may protest against Type 2 diabetes others say that caffeine may cause a higher secretion of insulin from the pancreas. Eventually caffeine in coffee decreases insulin sensitivity, making it difficult for your cells to respond to blood sugar spikes. High blood sugar levels lead to deterioration or arteries with the increased risk of cardiovascular disease.

Well that is confusing isn’t it?  What is clear is that while some people may tolerate coffee and reap the health benefits, it can be harmful for others.

Coffee and loss of nutrients

According to Columbia University Health Services, the caffeine in coffee causes calcium excretion. The loss is a small amount but over time could lead to osteoporosis later in life.

A high intake of coffee causes loss of magnesium, a mineral which is involved in over 300 enzymatic reactions in the body. Magnesium is one of the most overlooked deficiencies there is with only about 50% of US adults reach the RDA. Low intakes are linked to type 2 diabetes, metabolic syndrome, osteoporosis, heart disease, asthma, and colon cancer.

Green leafy plants supply good amounts of magnesium and the majority of people don’t eat enough of them if any.

Dopamine is known as the feel good neurotransmitter although it has many other functions in the body. Acetylcholine is another neurotransmitter that is involved in the everyday functioning of the brain, including learning & memory and sleep quality. You can find out more about how these two neurotransmitters are affected by caffeine in this excellent article.

So, what about giving up coffee for detox?

If you need caffeine to get through the day then you are addicted to it and my advice is to wean yourself off it before it does you any more harm.

If you don’t think you are addicted to it then it’s a good experiment to take a break from it and see how you function without it. You might be surprised by how much you rely on it.  That was me about 25 years ago. I didn’t feel properly awake in the morning unless I had a cup of coffee.

I don’t recommend just stopping it. Much better to reduce it gradually. You can try drinking green tea
instead but limit 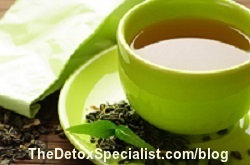 it to a couple of cups a day. Green tea is much lower in caffeine and higher in antioxidants and is very healing. More info on getting off coffee here.

If you happen to have a have a genetic variation of the caffeine-metabolizing enzyme and metabolize caffeine at a slower rate it can increase the risk of the negative effects.

Both Dr Eldon Hass and Dr Mark Hyams, who have led people through successful detox programs, recommend avoiding coffee when you detox.

So, give coffee a break when you detox. Nourish yourself with good foods that support the detox system and keep your blood sugar steady and then see how you feel about going back on coffee.

Previous Post: « Do You Need To Detox Your Body From Toxic Chemicals?
Next Post: How To Use Superfood Beets For Liver Detox »