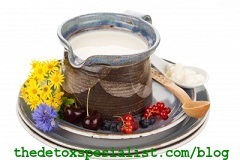 I’ve been watching the TV program Superfoods for the past few weeks and this week the program looked at kefir. They didn’t say anything about it being a good detox food but many health practitoners recommend drinking it to support detoxification.

Kate Quilton, the presenter, introduced Deborah Carr, a woman who was so passionate about the health benefits of milk kefir that she decided to set up a company to produce it.

Deborah had been diagnosed with IBS and subsequently Crohn’s disease, which doctors have no medical cure for. She tried all sorts of medication which she said did not help much and made her feel worse but was cured after she discovered kefir and started drinking it every day. No wonder she was so passionate about it!

What is Milk Kefir?

Just to give you a little backgound on Kefir (pronounced keh-FEAR), it is considered to be the oldest known fermented milk drink and is thought to have originated many centuries ago in the Caucasus Mountains, a region of the former USSR.

It is traditionally made from cow’s milk, goat’s milk or sheep’ milk and kefir “grains”, live active yeast and bacteria, proteins, lipids, and sugars that feed the organisms. But, in the last few years, there has been a lot of buzz about coconut kefir which is made with either coconut water or coconut milk.

Although yogurt is a fermented food kefir is considered to be better for you as it contains live enzymes and many more strains of beneficial bacteria (and some beneficial yeasts) than yogurt does.

The beneficial bacteria in yogurt pass through the digestive tract and are called transient bacteria but the bacteria in milk kefir are said to be able to colonize the intestinal tract.

In the program the presenter, Kate, had her stools tested for bacteria both before and a week after she drank kefir daily but no difference was found in the amount or strains of bacteria.

I can only assume this was because she had not been drinking it long enough as other research has shown that the bacteria can and do colonize. The fact that kefir apparently cured Deborah’s Crohn’s disease suggests that the bactiera did colonize in her gut.

I’ve seen claims that kefir promotes the production of bile. Bile is the vehicle that the liver uses to eliminate toxins from the body that it has detoxified so it would be good if it did this but I can find no evidence to support this. It seems to be one of those statements that simply gets copied from one site to another.

The bottom line is that the various cultures who have traditionally eaten fermented foods have lived healthily to a ripe old age. Kefir is one of the highest probiotic foods you can drink.

The latest research shows that our health and longevity is very much influenced by our microbiome, the colonies of various microbes that live in our guts. A number of health conditions and chronic diseases have been linked to the makeup of our microbiome.

Kefir is indeed a good detox food to have regularly whether you are on a detox diet or not. Just make sure it’s made with organic milk.

Home made milk kefir is best

Store bought Kefir is often made with a starter culture and not the proper “grains” and has nowhere near the amount of bacteria in it as homemade kefir. You might get 10 strains of bacteria in commercially made kefir but home made can have 40-60 strains. Pateurization destroys the heat sensitive B vitamins.

If you find milk kefir too sour for your taste or you don’t tolerate dairy products then try coconut milk kefir. It has a much sweeter taste and the texture is smoother. It’s delicious poured over fresh fruit or used as a base for a smoothie. I wrote  post about it here.

Here’s how to make milk kefir:

Do you already drink this great detox food? If not do you think you will try it?

Previous Post: « Is A Pegan Diet A Good Detox Plan?
Next Post: Is It Toxic To Cook With Sunflower Oil? »