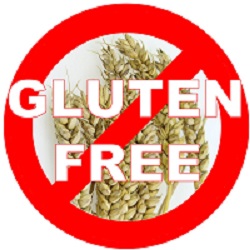 Following a gluten free diet has been called an unhealthy fad diet unless you have been diagnosed with celiac disease, but is it? Lets take a look at gluten and why people might want to avoid it.

Gluten is a protein found in grains like rye, barley, wheat, triticale, spelt, kamut and farro.  Oats, that were often included as a gluten containing grain contain avenin, a protein that many celiacs can tolerate and not gliadin the substance in gluten that causes the most problems.

Most people consume gluten every day.  It comes in different forms such as wheat bran, wheat flour or rye flour and is often found in products like bread, cakes, cookies, pastry goods and ready meals. It is also found in in other products that you might not expect to find it in such as malt vinegar, soy sauce, stock cubes, sauces and more.

Why Would You Avoid It?

There are many reasons why some people avoid gluten. For those with celiac disease, an autoimmune disorder that affects the small intestine lining and can lead to severe malnutrition and digestive problems, consuming gluten can damage or irritate their bowels. People diagnosed with celiac disease must be very careful to completely remove gluten from their diets.

Other people who need to avoid gluten or just wheat are those with wheat or gluten sensitivity. Symptoms of this type of condition include a consistently runny nose, sneezing, hives, diarrhea, abdominal bloating, headaches, and a lot more.

If you’re experiencing these types of symptoms, you should first consult your medical or health professional to rule out other causes rather than trying to diagnose yourself.

Be aware that there are no conventional tests for wheat or gluten sensitivity. You would have to see a Functional Medicine practitioner or other knowledgeable health practitioner who knows about the new Cyrex Labs test for gluten or wheat sensitivity.

Alternatively, you can just try a gluten or wheat free diet for 6 weeks and see how you feel. Doctors often say it’s all in the mind if you feel better off wheat but an experiment done for a UK TV program concluded that people with gut symptoms  suffered significantly more in the weeks where gluten was introduced into their diet without their knowledge compared with when they were gluten free.

There are long standing beliefs that consuming gluten can also aggravate some existing autoimmune system diseases that you may already be experiencing. This includes multiple sclerosis, rheumatoid arthritis, psoriasis, Hashimoto’s thyroiditis, Crohn’s disease, ulcerative colitis, lupus and others.

It doesn’t necessarily mean that consuming gluten is the root cause of the disease: rather, gluten exacerbates these existing conditions, contributing to flare-ups. There is also evidence that consuming gluten can add to overall body inflammation that leads to other side effects, such as joint pain, depression, and fatigue.

Is a gluten free diet unhealthy?

There has been a lot of criticism from doctors and dieticians who say that going on a gluten free diet is unnecessary and unhealthy if you have not got celiac disease because you are cutting out a whole food group.

It’s a fact that we are consuming gluten containing foods in higher amounts at the expense of foods like fresh fruit and vegetables, healthy proteins, and beneficial fats.

The best way to avoid nutritional deficiencies on a gluten-free diet is to eat whole foods. Fruits, vegetables, legumes, nuts, seeds, low-mercury non-farmed fish, organic eggs, free range poultry, grass fed meat and dairy products from grass fed cattle are great sources of all the nutrients you need. The more variety in your diet, the less likely you are to suffer from a nutritional deficiency.

It’s a fact that the grains and flours we consume today are very different from the ones our grandparents and great-grandparents consumed. They are not grown the same and we don’t prepare them the same.

Wheat grown these days is much higher in gluten that original wheat and Dr Fasano, tireless researcher into celiac disease, has stated that we don’t have the enzymes to properly digest modern wheat. While the undigested portions of proteins may not affect some people many do suffer symptoms.

This is one reason why it’s usually recommended that you avoid gluten grains when you are following a detox diet.

Grains are sprayed with toxic chemicals

Added to the problem of digesting it is the fact that wheat and other grains are sprayed with the toxic herbicide glyphosate before harvesting to help with drying.

Glyphosate, classified as a probable carcinogen by The International Agency for Research on Cancer, gets into products made from wheat flour including bread. Gerald Wiebe, a farmer and agricultural consultant, believes the use of glyphosate on wheat may be connected to the rise in celiac disease and the explosion of gluten intolerance.

I try to avoid as many toxic chemicals as possible from food, personal care products and in my home. Avoiding glyphosate seems like a good enough reason to avoid gluten to me intolerant or not!

Related reading: Should You Detox Your Body From Glyphosate Weedkiller?

Do You Need to Give Up Eating Cereal, Bread, and Pasta?

Fortunately not. There are products available these days that are good substitutes for gluten-based products although not all gluten free products found in supermarkets are healthy. Many gluten free breads and cakes contain sugar and unhealthy fats so you have to check labels carefully.

More and more companies are however producing healthier gluten free products although they do tend to be more expensive.

Eating out can be tricky because it’s hard to know what the different dishes contain but, it is easy enough, and becoming more common, to ask your server to find out if any barley, wheat, or rye has been used in any dish you might want to order. Many restaurants also state on their menus if a dish is gluten free.

Another challenge is learning more about food that contains gluten or wheat such as couscous, food starch, brewer’s yeast, and spelt bran.

The good news is, many of today’s eating establishments and health food stores provided excellent gluten free offerings in response to the growing number of people who have decided to go wheat-free or gluten-free for a happier, healthier lifestyle.

I discovered many years ago that when I ate a sandwich for lunch I became bloated a few hours later but if I ate a salad and no bread, I didn’t. I started to avoid things made with wheat flour then and eventually, after I learned more about gluten, I decided to avoid all gluten grains. I’ve never looked back.

What about you? Have you ever tried a gluten free diet or going wheat free for any length of time? What was the result? Let me know in the comments.

Previous Post: « Caramelized Cauliflower Frittata: Cauliflower Can Be Delicious Too
Next Post: Detoxing Your Kitchen | 3 Toxins to Watch Out for In Common Kitchen Items »