The story last week of Merlene Paul who had some bad reactions caused by the toxic chemicals from a packet of T shirts she had just opened caught my eye. This is a typical reaction of a person whose detox system has become overloaded.

Living in a chemical soup

We are surrounded by toxic chemicals in and out of the home but as most people can’t smell them or see them or have any obvious reaction to them they are rarely given a second thought. They get into our blood from the air we breathe as they are absorbed from the lungs.

They are then either processed by the detox system and eliminated or stored in the tissues until our bodies can figure out a way to get rid of them.

Merlene discovered that she reacted badly to formaldehyde when she became ill 20 years ago while working in the interior design industry.  She was exposed to formaldeyde and number of other toxic chemicals given off by rolls of fabrics that had been treated with them for hours day in a day out.

Her detox system became so overloaded with the chemical or damaged by it that she became hypersensitive to it.  And the problem for Marlene is that it’s hard to get away from formaldehyde. It is found in mattresses, bedding, carpeting, ( carpeting is a major source of chemicals in the home), paints, furniture and in most of the clothes that we buy. 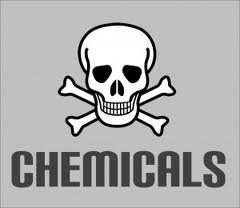 Your clothes are full of chemicals

Clothing manufacturers commonly use chemicals to prevent wrinkling and mildew and as flame retardants. Some experts believe that the chemicals on our clothes can contribute to a range of health problems from breast cancer to infertility.

Last year formaldehyde was described by the US National Toxicology Program as a human carcinogen. Several clothing manufacturers in the UK have said they are committed to removing hazardous chemicals from their supply chain by 2020. Seems like that’s too long to me!

In the 70’s many people discovered they were affected by formaldehyde when they had therir homes insulated with Urea Foam Formaldehyde Insulation. And more recently people were affected by the formaldehyde used used to make walls, cabinets, and furniture in trailer homes the government gave them after Hurricane Katrina

Some of the symptoms people complained of were fatigue, headache, dizziness, depression, poor memory, brain fog, burning eyes and throat, cough and dermatitis.

We are all exposed to toxic chemicals every day so how come we do not all get reactions like these? It all boils down to how well your detox system works.

Your body has a very sophisticated and complicated detox process which neutralizes toxins so they can safely be eliminated from the body. It relies on a number of specialized enzyme reactions which in turn all rely on certain vitamins and minerals being present in adequate amounts. If an enzyme lacks the vitamin of mineral it needs to work it becomes inactive.

For example, formaldehyde is an aldehyde that that is normally changed into an acid that can can safely be excreted in the urine. One of the enzymes that does this needs the minerals molybdenum and iron to work.

If you are lacking in any of the nutrients needed by the detox system your detox pathways will not be as efficient as they should be and the chemicals can build up. If you have a heavy exposure to a chemical like Marlene did then it’s easy to see that the nutrients needed to detox this chemical can easily become depleted especially if there was a deficiency in the first place.

When the chemicals build up you are twice as likely to react to chemicals in the environment.

Genetic studies have shown that some individuals have genetic differences in the Phase 1 or Phase II liver detox pathways which could prevent them from detoxing environmental chemicals adequately.

Rev up your detox system

Age, and diet has an effect on detox too but it’s not all doom and gloom though because it’s possible to get these detox pathways working again. By supplying the nutrients needed by the detox system both from food and nutritional supplements you can push the liver detox pathways so they function better.

You must of course also minimize your exposure to chemicals as much as possible. Use non toxic building materials and paints where possible. Choose natural fabrics for furniture and clothing. Use natural flooring and get new carpets cleaned using a non chemical method as soon as they are laid. Use natural personal car products. Make sure you have good ventilation both at home and at work.

There is still a lot to learn about how the detox system copes with these toxic chemicals and we are only just beginning to understand what impact they have on our health but it’s obvious that we do need to detox our bodies regularly if we are to prevent our detox pathways becoming overloaded.

My latest course Recharge and Energize Detox shows you how.