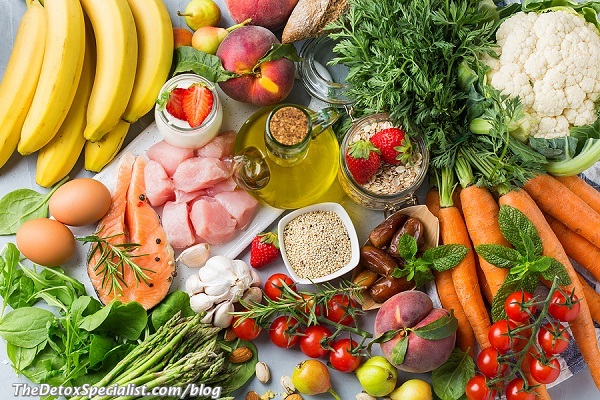 The debate between organic food vs non organic food has always been a burning issue among the consumers and nutritionists around the world but recent reports of soaring food bills makes the question of whether you should eat organic food for detox even more important.

People have become very concerned about the quality, nutritional values and toxic effects of different food ingredients available in the general stores or mega markets. I believe the case for organic food for detox is clear cut.

Conventional farming involves the use of chemical fertilizers for influencing the growth in an artificial way.  To be cost effective, they provide plants with the minimal ingredients needed to make the plant grow. Organic farming doesn’t allow use of traditional chemical ingredients. Instead organic farmers depend solely on natural composts and manures for assisting the natural growth of the crops.

According to soil experts the most important determinant of human health in farming is a healthy soil. Plants get their nutrition from a wide variety of minerals from the earth as well as from dead plants and tiny animals. A healthy soil contains worms, bacteria, fungi and insects which help to convert the raw ingredients in the soil to a form that the plants can use. Chemical fertilizers kill much of the life in the soil necessary for the health of the plant.

It stands to reason that the more minerals and other nutrients available in the soil the more nourishing it is for the plant and humans eating it so it is better to chose organic when you are following a detox diet plan.

Harmful pesticides and herbicides are used for managing insects and weeds in the conventional farms. On the other hand, organic farms utilize the scientific studies on beneficial flora and fauna. The organic farms use the beneficial insects for killing and deterring the harmful ones. The farmers rotate the crops and mulch to manage the weeds.

The Environmental Working Group (EWG) has conducted several scientific researches on consumer products available in the market. The objective of their study was to find out the extent of use of harmful chemicals in different foods. Their latest report found pesticide residue, including chemicals banned for use in agriculture, in 68% of the food they tested.

They have short-listed some of the dangerously chemical-exposed crops as well as the least exposed crops and produce an annual report.

Organic food is expensive so if you cannot afford to buy all organically produced food when you detox it makes sense to at least avoid the Dirty Dozen.

To help, EWG have just released their newest shopping guide Good Food on a Tight Budget. This brand new shopping guide looks at 100 foods that are healthy, inexpensive, clean and green. More tips on Clever ways to eat healthy on a tight budget here.   And even more tips from this article on How to eat Healthy on a Budget  and this one on buying local. 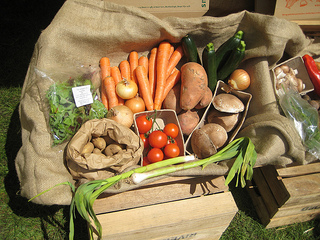 Scientists are voicing their concerns that antibiotic medicines are losing their effectiveness on humans due to their increased use in animal feed and that the use of artificial growth hormones pose a risk to our health.

According to Harvard University nutrition experts, the USDA and The UK Food Standards Agency there is no difference between non-organic and organic food. But, according to the Soil Association, much more research is needed to fully understand the effects of the difference in nutrients in organically produced food and non-organically produced food. Few long-term research studies have been done as research into organic farming is under-funded internationally.

We constantly hear contradictions from scientists. In 2010 Danish researchers claimed that polyphenol levels were the same in organic potatoes, carrots and onions as those grown with pesticides while this year (2012) researchers from the University of Barcelona found that organically grown tomatoes contained higher levels of polyphenols than tomatoes grown with pesticides.

Polyphenols are natural plant antioxidants that have been associated with reduced risk of heart disease, cancer and other degenerative diseases. The Danish study has been criticized because the foods they conducted the research on are not the first that spring to mind when taking about food antioxidants.

A new study of corn, strawberries and marionberries (a type of blackberry) showed that organically grown vegetables and fruit contained significantly higher levels of cancer-fighting antioxidants than conventionally grown foods. The research suggests that pesticides and herbicides actually prevent the production of phenolics — natural antioxidant chemicals that act as a plant’s natural defense and also happen to be good for our health and an important part of the detox process.

A 12-year German study found that organic food contains higher levels of minerals. The largest differences were for potassium and iron, but magnesium, calcium, phosphorus and vitamin C levels were also higher in organic vegetables. These minerals are vital for your body’s detox system.

The aim of a detox diet is to reduce the chemical toxins in the body so it’s important not to add to the toxic load. Your health is vulnerable and more important so I believe that the question of organic food vs non organic food for detox is quite clear.  Make your budget short in other products, but don’t compromise your health.