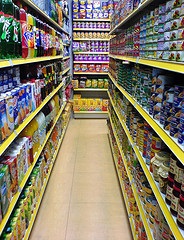 The sight of various attractively packaged foods on the supermarket shelves might have you drooling but it’s a fact that as well as the food you might be getting a dose of highly toxic chemicals that you had not bargained for.

They can do this even even when they haven’t been exposed to conditions known to unlock potentially harmful chemicals, such microwaving, the steam of a dishwasher, or the action of the sun’s ultraviolet rays.

They can even leach from plastic faster when the container is old and scratched or washed with harsh detergents. Did you know this?

The truth behind BPA (bisphenol A)

BPA is a chemical that has been used in hard plastics and coatings of food and drinks cans since the 1960’s. It became one of the most studied chemicals on the planet when it was discovered that it is an estrogen mimic or endocrine distruptor.

This means that the chemical can behave like the hormone estrogen does. It can lock onto cells blocking the action of natural estrogen.

Because of this it has been linked to a long list of serious health problems including:

BPA Free Containers and Packaging Are Just As Bad

Since researchers found that babies were more susceptible to the toxic effects of BPA, which was in babies bottles and sippy cups, manufacturers have strived to bring BPA free containers onto the market.

The scary truth is, as many experts have suspected, these BPA-free plastics leach toxic chemicals that are just as harmful as BPA. Researchers say that in their studies some BPA-free products actually released synthetic estrogens that were more potent than BPA.

BPA has been replaced with bisphenol-S (BPS) or bisphenol-F (BPF) which are similar in structure to BPA and appear to have similar endocrine disrupting effects or worse.

Would you believe that 175 toxic chemicals are being used in food packaging even though they’re known for their risks to human health?

What’s even harder to believe is that there are no federal laws requiring chemicals to be proven safe before they’re used in food containers and packaging.  Crazy don’t you think?

The Food and Drug Administration (FDA) has said that, based on review of hundreds of studies, BPA is safe at the very low levels that occur in some foods.

The chemicals found in plastic food packaging have already termed as being carcinogenic (cancer causing), reprotoxic (having a toxic effect on the reproductive system), or mutagenic (changes the genetic material, usually DNA). Would you want to take a chance on them?

They are bio-accumulative and persistent. Basically they can build up in your body and are hard to get rid of. They are thought to contribute to the rising levels of obesity too.

How to Avoid Toxic Plastics

You can avoid these harmful plastics by using glass, Stainless Steel

or ceramic containers for food storage. If you choose ceramic, make sure the glaze used is free of heavy metals.

Another alternative is to wrap food in Unbleached Baking Paper

first before sealing in airtight containers or bags.

Even plasticizers like di(2-ethylhexyl) adipate (DEHA) considered to be of low toxicity, found in PVC cling-film, has been shown to migrate into the food.

Some sites recommend waxed paper but the majority is coated with paraffin wax, which is a petroleum product so I don’t recomend that.

Some newer waxed paper products are coated with 100% natural soybean wax which is a better option although I don’t know if it can transfer to the food.

Beeswax cotton wraps may provide an even better safe and effective option.

It may be frustrating to banish toxic chemicals from plastic food continers and packaging from your kitchen but it is well worth it in the long run if you value your health and that of your family.  Perhaps you’ve already started to get rid of plastics.

Don’t forget to share this article using the share buttons below so that others may learn about these toxic chemicals.

Previous Post: « Detox Your Body From Environmental Pollutants With Broccoli Sprouts
Next Post: Learn About Detox At The Detox Summit 2014 »