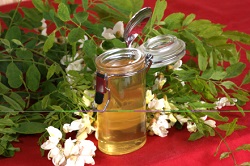 Amazon reviewers have accused TV presenter and fitness guru Davina McCall of being misleading for using honey in place of sugar in her sugar detox diet book: 5 Weeks to Sugar-Free Cookbook released earlier this year.

Although some reviewers praise the book others have said “Some of these recipes contain more sugar (in whatever form) than many regular recipes!” “Bit of a con- just uses different sugars in cakes- lots of honey, maple syrup!!”

Davina admits to having been a complete sugar addict. Before weaning herself off the stuff she revealed that, not only did she take three teaspoons of sugar in her tea and coffee,  but she used to eat at least five bags of Haribos on a Friday night when filming Big Brother.

To her credit she had earlier said “I’ve stopped buying table sugar – brown and white – and instead I keep some honey and maple syrup in my kitchen. At least they’re closer to their natural state and they contain some nutrients. We even make a few puds and cakes at home, replacing table sugar with maple syrup or honey. And yes, I know these are forms of sugar too, but we use as little as possible and this is real life after all. I’m not perfect.”

A lot of “healthy” recipes I have seen recently in magazines and on the internet do seem to use honey now in place of refined sugar. So, can you use honey when you go on a sugar detox diet? Is it any better for you than refined sugar?

The sort of honey you buy in the supermarket is often heavily processed and may even have been chemically refined. Excessive heat used in processing destroys the natural enzymes, vitamins, minerals and beneficial phytonutrients that you would get in raw honey.

Honey actually contains the same basic sugar units as table sugar. Sugar is made up of sucrose which is composed of approx 50% glucose and 50% fructose. Honey contains about 30% glucose and less than 40% fructose. There are also about 20 other complex sugars in the mix and dextrin, a type of starchy fiber. This means that your body uses more energy to break it all down to glucose so you end up accumulating fewer calories from it.

But, that’s not all.

The main difference between honey and refined sugar is the glycemic load. Honey does not cause an immediate sugar spike and elevated insulin release like white sugar.

One interesting randomized controlled trial of 48 diabetics showed that those fed honey for 8 weeks lowered their body weight, triglycerides and total cholesterol while their HDL (good) cholesterol increased which is good. However their HbA1c (a marker of blood glucose levels) also increased, which is not good.

Honey was eaten by our Paleolithic ancestors so how can it be bad for us?

In answer to the question “Is Honey A Safer Sweetener?” Mark Sissons, author of the Primal Blueprint, says “raw honey might be a nice choice for a treat. It’s clearly superior to refined sugar, and the extent of the damage we normally see from sugar intake doesn’t seem to occur with honey”.

Chris Kresser, author of the Paleo Cure says “it would appear that honey has many benefits that outweigh the potential downsides of consuming a concentrated sweetener. I recommend using raw honey, which will have the most enzymes and nutrients when destructive heat has not been used”.

One of the most sensible answers I came across was by Joel Runyon, founder of Ultimate Paleo Guide. He says “Honey (in its natural, raw, unprocessed form) is Paleo because it’s a natural food that has been eaten by people throughout history. While honey is Paleo, eating too much sugar in general is not encouraged. Too much sugar is still too much sugar, no matter where it comes from”.

While it’s true that our Paleolithic ancestors ate honey they did not bake cakes or make cookies with it. It seems to me that the problem with using raw honey to replace sugar in baking is that once you heat it is no longer raw and you will lose a lot of the benefits.

What about Maple Syrup?

Maple syrup contains some vitamins, minerals and antioxidants but is also about 2/3rds sucrose (the stuff in table sugar). It has a relatively high glycemic index, similar to raw honey. Bottom line: It’s only slightly less bad than sugar.

So if you want to detox sugar yet still want to have a healthy baked treat from time to time what can you use instead?

Healthy alternative to sugar for baking?

Stevia: Stevia, which comes from a plant, has become popular. It has no calories and no glycemic impact making it suitable for diabetics as well as weight watchers. It is about 300 times sweeter than sugar so you only need a tiny amount but it has a bitter after taste which many don’t like.

Xylitol: Xylitol is another ‘natural’ but processed sweetener found in low concentrations in the fibers of many fruits and vegetables that does not trigger insulin as it has a very low glycemic index of 7. You have probably seen it in “sugar-free” chewing gums, mints, and other candies.

The drawback with it is it is an alcohol sugar and can have a laxative effect and even cause diarrhea and intestinal gas in some people because sugar alcohols are not fully broken down during digestion.

Agave syrup: I used to use organic agave syrup but there is so much controversy about it now that I have decided against it. Many health experts are saying that most agave syrup is nothing more than a laboratory-generated super-condensed fructose syrup, devoid of virtually all nutrient value and is actually worse than high fructose corn syrup (HFCS).

HFCS which is used in many products in place of sugar has been blamed for fatty liver and increased insulin resistance.

Makers of Madhava organic agave say that their minimal process does not use chemicals or heat and produces a high quality product. Although it contains natural fructose as found in fruit it is far different from the chemically-processed, pesticide-laden, genetically-modified High-Fructose Corn Syrup.

Lucuma powder: One good alternative I like is Lucuma powder which comes from the exotic Peruvian fruit known as the “Gold of the Incas”. It is full of nutrients and has a sweet maple syrup-like flavour so is ideal for using in puddings, cakes, deserts and healthy ice cream.

Dates: I like using dates to sweeten in recipes where possible. You can pit dates (Medjool Dates are best) and blend them with a little water 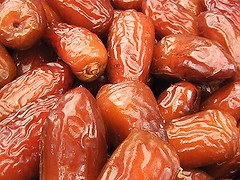 to make “date puree” which can be used to bind or sweeten up raw dessert recipes or in baked desserts.

If you have a craving for something sweet when you are on a sugar detox diet try eating just one date. It can satisfy a sugar craving without the guilt.

Have you tried any alternative sweeteners? What’s your favorite?