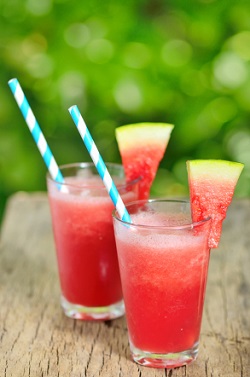 In one ad for Philips Juicers, Madelaine showed how to make a Watermelon Cooler Juice consisting of watermelon, lime and mint which she claimed was an “amazing fat buster”. (recipe below)

The company claimed that the amino acid citrulline, found in watermelon, when converted in the body to another amino acid, arginine, could help prevent excess accumulation of fat. They cited some animal studies to back up the claim which was thrown out by the ASA.

So, can a juicing diet help you lose fat?

Juicing diets have come in for a lot of criticism by many doctors, dietitians and nutritionists as being unhealthy and dangerous. They warn that juicing leads to water loss and muscle loss and not fat loss. They say that you pile on any weight lost after you stop the juicing. So what’s the truth?

According to nutritionist and diet guru Ann Louise Gittleman juicing can help you lose fat. For over 25 years she has helped millions of people lose weight and fat with her popular Fat Flush plans that includes her famous cranberry fat flush juice. (recipe below)

I’m sure you’ve heard of Joe Cross from his famous movie “Fat, Sick and Nearly Dead” in which he describes his incredible journey back to health with a 60 day juice fast during which he lost 100 pounds that included fat loss.

He was prompted to do the juice fast after talking to many weight loss experts when he was told by his doctor that he would die early unless he changed his way of life.

Joe’s doctor monitored his blood throughout the fast. His total cholesterol and LDL cholesterol (bad cholesterol), which were high before the fast, reduced to normal levels during the fast. Joe’s weight has remained stable since he did the fast in 2005.

It all depends on the the food you eat when you return to eating. If you go back to your old eating habits then of course you will put the weight back on but if you eat healthy foods and exercise then you are much more likely to keep the weight off.

Joe advocates sticking to the 80/20 rule when juicing. That means you should use 80% vegetables and only 20% fruit in your juices. Remember, root vegetables such as carrots, beets, sweet potato and other starchy vegetables can add a natural sweet taste to the juice

If you are diabetic or have pre-diabetes then you should probably not do a juice fast unless you are being closely supervised by a health professional. You can include a fresh juice every day combined with eating more fresh fruit and vegetables or make green smoothies.

juicing can be beneficial for people with elevated cholesterol and high blood pressure, and those suffering from autoimmune diseases, like arthritis, digestive problems and skin conditions. Juicing floods your system with powerful nutrients and antioxidants and helps unleash the natural healing power of the body.

According to Vince Del Monte, Certified Fitness Trainer and Nutritionist, juicing provides micronutrients that improve your body’s ability to add muscle and lose fat, speeds up your metabolism, improves digestive function to rid your body of built-up waste and toxins, reduces the effects of oxidative stress (which lowers cortisol levels), helps regulate blood sugar and detoxifies your liver and kidneys for better hormone production.

The key to losing fat faster without starving to death or spending almost all of your free time working out is to make your body work more efficiently at burning fat. That means speeding up your metabolism, boosting your immune system and correcting hormonal and digestive issues. The nutrients you get from juicing can do that for you, in minimal time and for minimal calories.

Here are the recipes for the Watermelon cooler Juice and the Fat Flush Miracle Juice although neither of these follow the 80/20 rule:

1/4 of a watermelon,
1 peeled lime (or less according to taste),
1 handful of fresh mint

Juice all the ingredients. 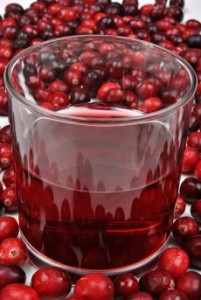 • Bring Cranberry Water to a boil; reduce heat to low.
• Place cinnamon, ginger, and nutmeg into a tea ball and add to the Cranberry Water.
• Simmer 15 to 20 minutes; cool to room temperature.
• Stir in the orange and lemon juices. Add Stevia Plus or maple syrup at this time, if desired.

For the fast track one day detox Gittleman suggests that you alternate drinking one cup (240ml/8oz) of filtered water and one cup of this Miracle Juice every hour. That means you drink 8 cups of Miracle Juice in total.

She says that every ingredient in the juice has been specially chosen to stave off hunger, balance blood sugar, rev up your metabolism and keep you feeling fit, energised and trim throughout the fasting day.

After following this juicing diet for a day you should break the fast the next day with green smoothies, an easy to digest soup or a plate of steamed veggies. Simple combinations are best so as not to tax the digestive system.

Neither of the above juices follow the 80/20 rule so here is one that does.

Simply juice the lot and pour over ice if you want.

You don’t have to go on a juice fast to lose weight. Simply by replacing one meal a day with a juice or two and drinking one glass before dinner will help you lose weight. A study done at Baylor University School of Medicine showed that people who drank just two glasses of juice a day lost 4 times more weight than those who did not.

Although there is plenty of anecdotal evidence that juicing can help you lose fat and keep it off, there does not seem to be any scientific proof that a juice detox will help you lose fat but Philips say that in future they would ensure any nutritional claims on behalf of the company would be backed by ‘robust’ evidence. We’ll just have to wait for that.

Have you tried a juicing diet?  Lost weight with juicing? Do let me know in the comments below.

Previous Post: « Sugar Detox Diet: Is Honey A Good Alternative To Sugar?
Next Post: Are Low Calorie Recipes The Best Way To Lose Weight After Detoxing? »