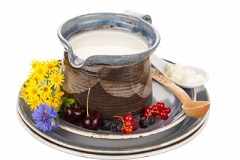 Sales of coconut water have taken off recently due to celebrity endorsements but did you know that coconut kefir has even greater health benefits and is an ideal food to make part of your detox plan?

Dairy Kefir, has been consumed for it’s extensive health benefits in Balkan countries for thousands of years but coconut kefir is now being hailed as the latest superfood.

The health beverage is made by fermenting what are known as kefir “grains” containing a wide variety of beneficial bacteria and yeast in coconut water.

The origin of Kefir is believed to be the Caucus region around Pakistan and Iran. Since its discovery, kefir has been used as a nutritional and medicinal drink. People who regularly consumed large amounts of kefir were found to live much longer.

Kefir contains several major strains of friendly bacteria not commonly found in yogurt and the enzymes and essential bacteria produced during fermentation have a probiotic effect. It also contains beneficial yeasts, such as Saccharomyces kefir and Torula kefir, which help control and eliminate overgrowth of yeasts such as Candida in the body.

More and more research is finding that good gut bacteria plays a vital role in the body and is essential for good health. Not only do the bacteria protect us against all sorts of invaders, bacteria, parasites, fungi, viruses and toxins that are in our food and drink that we ingest every day but they also play a part in detoxification of pesticides and toxic metals that we get from our food and the environment.

A recent rat study demonstrated just how protective your gut flora (when healthy, of course) can be in eliminating mercury from your body.

The “friendly flora” is destroyed by antibiotics and toxins in our environment and need to be replenished.

CocoKefir is among the beverages made using kefir grains and coconut water and has been endorsed by Donna Gates the author of the Body Ecology Diet.

Most commercial coconut kefir drinks on the market have been through a pasteurization process which destroys many of the beneficial bacteria. CocoKefir is raw, unpasteurized and is made with 100% raw young coconut water and contains no additives. Perfect for enjoying on a detox diet plan!

Unlike kefir made from cows’ milk, coconut milk kefir doesn’t have a strong fermented, sour flavor. It is pleasantly tangy, but the naturally sweet taste of coconut dominates. 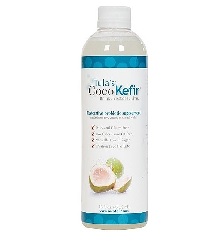 Coconut kefir will provide instant energy without increasing unhealthy or excess calories to the body. Coconut water is a good source of electrolytes which are essential for transfer of energy throughout the body. Coconut water from young and green (unripe) coconuts are most suitable due to the high concentration of natural sugar and the same PH as blood.

Many people following the popular Paleo Diet are turning to Coconut Kefir as an alternative to dairy products which are taboo for this way of eating.

The elimination of dairy products may lead to dairy tolerant people missing out some nutritious and beneficial foods but CocoKefir not only offers a wide range of vitamins and minerals, but also provides a variety of probiotic organisms and powerful healing qualities.

Coconut Kefir is used as an alternative by athletes due to its natural and pure ingredients. A study compared natural coconut water with plain water and a carbohydrate electrolyte beverage. And guess what? Coconut water was found to be more effective for whole body rehydration after exercize.

How to use CocoKefir on a detox diet plan

A half cup of the CocoKefir with your meals helps digestion. Try adding a little fresh ginger, stevia, lemon or lime. Drink half cup at bedtime to help establish a healthy inner ecosystem. Studies from Europe show that when you are lying still during sleep, the microflora reproduce faster.

According to Donna Gates it appears to cleanse the liver. Many people report their brown liver spots fading away and skin tags, moles, or warts drying up and disappearing.

Have you tried Coconut Kefir yet? It’s good to drink on a regular basis. Do you have a favorite way of using it?  If so please share your recipe with my readers in the comments.  And don’t forget if you like this post please share it using the share buttons below. 🙂