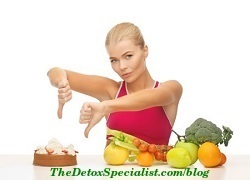 This week a prominant newspaper said that personal trainer Grace Lavinia claims that although carbohydrates continually receive bad press they are in fact good for you and help you lose weight. She says that carbohydrates are the body’s main energy source and need to make up about 1/3 of your daily calorific intake.

The sort of carbohydrates she is talking about are complex carbohydrates, the sort that are usually included on a detox diet, not simple carbs.

Complex carbohydrates, often called “good carbs”, are made up polysaccharides, a number of simple sugar molecules linked together. They are often rich in fiber and usually take longer to be broken down, through digestion, into glucose so it is released slowly into your blood stream. It provides constant energy and does not spike your blood sugar like simple carbohydrates do.

Simple carbs, often called “bad carbs”, are made up of just one or two sugar molecules and are broken down by digestion very quickly. The glucose is released very quickly into the blood stream raising blood glucose and triggering the release of insulin from your pancreas. This can result in blood sugar crashes and eventually diabetes.

Complex carbohydrates come from plant-based foods which contain many beneficial nutrients in addition to their carbs, including vitamins, minerals and antioxidants. They include starchy vegetables (potatoes, sweet potatoes, beetroot), whole grains such as oats, buckwheat, quinoa and pluses including lentils, chick peas and beans. These are the good carbs and the sort of carbs included on a detox diet.

Simple carbs on the other hand are mainly found in refined foods where the nutrients have been lost in the processing. They are foods like white rice, white bread, white pasta, products made from white flour, sugar itself, syrups, candy, pastries and desserts.

This infographic explains it all very clearly.

Why are carbs getting bad press?

One major study published in Sept 2014, that is often cited in articles, followed 148 people who were told to eat either a low-carb diet (under 40 g of carbs per day) or a low-fat diet, for one year revealed that those on a low-carb diet lost three times more weight than the low-fat dieters.

What’s more the low-carb group also got better HDL cholesterol levels and lower triglycerides than those in the low-fat group!

Other studies which have not followed participants for so long have produced similar results.

Other researchers have suggested that these results may not be due to how many carbs the participants ate but more to do with the quality of the other food choices like lean protein (fish, poultry, legumes), healthy fats (monounsaturated and polyunsaturated) and unprocessed carbs — such as whole grains, legumes, vegetables, fruits and low-fat dairy products.

A landmark study, known as the Vermont Study, found that T3, the active thyroid hormone, is very sensitive to calorie and carbohydrate intake. When calories and carbs are too low, your T3 levels drop. T3 regulates your metabolism so you don’t want it to be low.

It’s also known that eating too low-carb for too long can cause disruptions to many hormones including women’s hormones contributing to muscle loss.

Carbohydrate is a vague term

Lavinia quite rightly says that the term carbohydrate is incredibly vague. When researchers say that carbs are bad they are talking about refined carbs the sort that spike your blood sugar.

She goes on to say “Carbohydrates are the body’s main energy source. Many of our internal organs including the heart, kidneys and the brain require them in order to function properly – without healthy carbs your energy levels will plummet and concentration will become more difficult”.

One important organ she hasn’t mentioned is the liver. Your liver needs energy to perform it’s many functions including detoxification. All cells perform a certain amount of detox and need energy for it.

Studies have shown that by restricting carbohydrates, your brain may not produce sufficient amounts of feel-good brain chemicals, such as serotonin. One of the main complaints of dieters following the early Atkins diet, a very low carb diet,  was that they felt grumpy, irritable and restless.

If your serotonin levels plummet, your moods are likely to suffer and you may not be able to sleep properly. Serotonin is also the chemical which makes us feel full after eating.

The Paleo diet has become very popular recently as a means to detox and for losing weight. This diet can also have a big impact on cholesterol and blood pressure problems too, improving both.

The Paleo diet has become known as a low carb diet because it restricts carbohydates including ones deemed healthy on other diets such as white potatoes, whole grains, pseudograins such as quinoa, and legumes.

Not all Paleo diets are low carbohydrate. The Kitavans, people who live on one of the islands of Papua New Guinea, are one example of healthy people who eat a high carbohydrate Paleo diet. I think you will agree that it’s all very confusing.

Are carbs good or bad?

Another study by Australian researchers followed 106 dieters for a year. Half ate a carb-rich diet. The others followed a low-carb diet. After a year, the carb eaters felt happier, calmer, and more focused than the carb-deprived group, who reported feeling stressed out.

The reason for this says Grant Brinkworth, PhD, the lead researcher of the study, is because carbs boost mood-regulating, stress-reducing chemicals in the brain, and high-protein, fatty foods may deplete them.

Everyone agrees that a diet high in refined carbohydrate is not healthy, especially the standard Western diet, where carbohydrates are eaten to excess. The sources of carbohydrates are mostly from refined grains, sugar and fructose, all of which contribute to health problems.

There is no clear definition of exactly what constitutes a “low carb diet”. What is “low” for one person may not be “low” for the next.

People who are physically active and have more muscle mass can tolerate a lot more carbs than people who are sedentary.

Generally the best level of complex carbohydrate for most is somewhere between 100 – 200 grams per day and no less than 80 grams a day.

In my experience with my nutritional clients, if you simply remove the unhealthiest carb sources from your diet, wheat (including whole wheat), and sugars and replace them with the healthy detox diet carbs then you’ll be well on your way to losing weight and improved health.

You can learn more about detoxing and weight loss in my brand new Recharge & Energize Delicious Body Detox Program.

Previous Post: « 5 Tasty Ways To Sneak Detox Veg Into Your Diet
Next Post: Detox Your Body & Lose Weight With Bouncing »