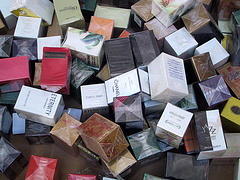 While waiting for my flight back from Spain last Saturday I was struck by the strong smell of perfume wafting from the duty free shop at the Airport.  Both young and old were snatching up the latest celebrity perfume probably completely unaware of the hidden toxins they contain.

A new study has revealed that many top selling perfumes and colognes contain a cocktail of potentially harmful chemicals that are not even listed on the labels. Most of these chemicals belong to a group of substances known as hormone disruptors. They interfere with how your hormones work and have been blamed for infertility and even cancer.

Perfumes made from the oils of plants have been used for thousands of years. The early Egyptians used perfumed balms as part of religious ceremonies and throughout the ages perfumes have played a big part in making people smell nice to attract the opposite sex or disguise body odor. But the development of modern chemistry in the 19th Century led to the creation of new synthetic fragrances.

It has long been known that some fragrances both natural and synthetic can cause allergic skin reactions, asthmatic reactions in some individuals, headaches and nausea.

A study in 2005 by Greenpeace International found that many well known perfumes contained chemicals that are bad for our health and the environment. Phthalates were the most common chemical found. One in particular, Diethyl Phthalate, is used in perfumes, cosmetics and personal care products as a solvent and has been found in 97% of Americans. It has been linked to changes in hormonal levels, damage to sperm DNA and abnormalities of the genitals.

The study also revealed that synthetic musks used in aftershaves and skin care products as well as perfume accumulate in the body and can increase the growth of cancer cells in test tubes.

As though that is not enough to worry about perfumes also contain petroleum based ingredients as well as other toxins that can cause cancer, birth defects, allergic reactions and disorders of the nervous system.

A more recent study reported this year by The Campaign for Safe Cosmetics and The Environmental Working Group discovered that many of the popular perfumes contain at least 12 chemicals not listed on the labels.

This has evidently come about because the labeling legislation in the USA exempts fragrances from being listed on product labels. In Europe, however, things are a little different. Certain fragrance chemicals that have been identified as as contact allergens have to be listed on the labels but other chemicals that go into the fragrance can simply be listed as “parfum”. So you don’t really know what’s in them at all!

One of the reasons they are not all listed apparently is because there are so many chemicals in perfumes that there simply would not be enough room on the labels. Now that tells you something doesn’t it?

Fortunately a few responsible companies have taken steps to exclude musks and phthalates from their products and some are also declaring all the ingredients on their labels.

However this does not solve the problem as many people who liberally apply perfumes, after shaves and other fragrance products are simply not aware of how it can affect other people as well as themselves. You’ve probably heard of second hand cigarette smoke, what about second hand perfume?

As awareness of the problems increases safer natural alternatives have begun to appear on the market. The main ingredients of natural perfumes are a combination of different essential oils from plants, Vitamin E  which acts as a preservative in an alcohol base. You can of course always make your own from essential oils but some people are allergic to those.

Some of the companies that are producing natural perfumes are:

So you might want to think twice before you use your favorite chemical perfume and do some detox to help get rid of the toxic chemicals that have already accumulated in your body. With Christmas not that far away it’s a good time to put natural perfume on your gift idea list.