Some of the main toxins that threaten your health are the heavy metals such as mercury, lead, cadmium and arsenic. Although not a heavy metal aluminum is also toxic. These toxic metals get into your body from food, water, air, or absorption through the skin. They become attached to proteins and molecules and disrupt the function of your cells causing serious damage. Good quality liquid zeolite is gaining a reputation as an ideal natural solution for detoxing heavy metals safely from your body.

Why do we need to detox heavy metals?

Toxic metals replace nutrient minerals and impair the function of enzymes that are involved in thousands of your body’s metabolic reactions including the detox system. They can also weaken and cause free radical damage to tissues such as your arteries, joints, bones and muscles.

The kidneys, intestines and nervous system are most sensitive to damage by mercury but it can lodge in the brain and many other tissues weakening the immune system. Mercury amalgams (silver dental fillings) have been found to be the main source of mercury exposure in most individuals. Although people who eat a lot of fish may also accumulate mercury especially if their detox pathways are not functioning optimally. This can be due to genetic variations or deficiencies of the nutrients needed for the detox system to work efficiently.

What is Liquid Zeolite?

Liquid zeolite is a relatively new oral supplement being used to successfully remove heavy metals, radioactive elements, pesticides and other environmental toxins from your body very safely and easily.

You may also have heard it referred to as Clinoptilolite. There are over 40 types of natural zeolite but the one most widely studied, and with the greatest health benefit is Clinoptilolite.

Zeolite has been used in powder form for some time in industry to clear up oil spills and as a feed additive for animals. In Eastern Europe, Japan and Cuba zeolites have been traditionally used in agriculture. It was even used to clean up the radiation from after the Chernobyl disaster.

Zeolites are naturally occurring volcanic minerals that have a unique honeycomb structure with a negative charge which attracts and traps the positively charged metals and other toxins.

Some of the toxins that zeolite (clinoptilolite) targets include:

Liquid Zeolite is excreted in the urine about 6 – 7 hours after taking it carrying the toxins with it. Some also leaves the body via the stools although this obviously takes longer.

Using liquid zeolite has proved to be a less invasive and less expensive treatment for heavy metal toxicity than IV EDTA (ethylenediamine tetra-acetic acid) and DMSA (dimercaptosuccinic acid) chelators which continue to be used in many arterial disease and other clinics.

The problem with these substances is they they also rob your body of minerals which have to be replaced. After initially attracting a toxic metal the chelator can drop it elsewhere in the body in preference to a valuable mineral.

Once a toxic metal or other toxin is attracted by zeolite it is not given up in this way. Because zeolites attract toxins they are full of toxins when they are mined. They have to be purified before they can be used as an oral supplement. Not all zeolite products that you find on the market have been cleaned well enough. The process is expensive and many companies do not bother with it or do not clean their zeolite sufficiently well enough.

It is even being suggested that it could help protect against the coronavirus and Swine Flu. Its anti-viral effect is not immediate. It only seems to happen after you have been using it for about four to six weeks, and most of the the heavy metals, pesticides, and herbicides have been pulled out.

Heavy metals and other toxins compromise immune function. Activated liquid zeolite removes these safely so it can improve immune function By reducing your body’s toxic load liquid zeolite makes the liver’s job easier and therefore takes the strain off this vital detox organ. This leads to a healthier liver. After 10 years on medication one woman reportedly cured a liver abscess after taking zeolite for only 8 weeks.

As mercury and toxic metals can impair kidney function it can help to improve their function. Liquid zeolite does not cause any damage to the kidneys.

Liquid Zeolite traps free radicals in its complex structure. It inactivates the free radicals and eliminates them from the system. this is one way it may help prevent cancer.

Although no claims can be made for zeolite for the treatment of cancer Dr. Cousens from the Tree of Life Rejuvenation Center has drawn attention to a preliminary 14 month study, with 65 patients with terminal cancer patients who were sent home to die. 51 of the patients experienced complete remissions with zeolite. No indication of dose was given.

In fact Dr Cousens, of the Tree of Life Rejuvenation Center in Arizona, says “I recommend that as long as we choose to keep eating, breathing, and drinking water, we keep taking all natural zeolite.”

In a study he did on 60 people that went to his Center for a 2 week green juice fast he found that even the ones who were on long term organic, raw food diets, had all 26 of the toxins they tested for. These toxins don’t come out easily.

How to choose a liquid zeolite product

There are a number of companies offering liquid zeolite each claiming that theirs is the best so how do you choose one?

Firstly, make sure it has been cleaned. These may be described as “activated”. You don’t want to take one that is still full of toxins. Secondly it must contain a particle size of less than 5 microns.

There are products that have high mold and bacteria content because they use ingredients such as humic acid. It’s best in this case to ask for a third party analysis.

Here are some suggestions:

If you are unable to get any of the above  information don’t buy it.

One that I can highly recommend is Touchstone Essentials Pure Body Extra.  Pure Body Extra is a natural way to detox the environmental toxins from your cells every day. 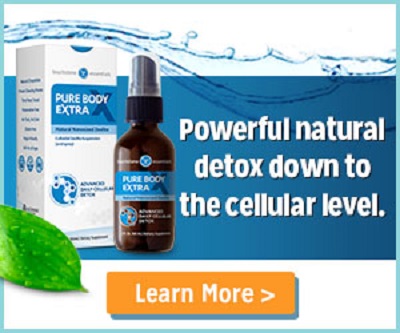 Some of the toxins that Pure Body Extra targets: are:

By detoxing these harmful substances, your body can start to repair, revitalize, renew and function optimally again.

How much to take?

The recommended dosage is 4 sprays three times per day.

It is important to drink eight glasses of water a day while using liquid zeolite as can be dehydrating. If you don’t drink enough water, you could experience side effects; 99.9% of the side effects of this product are due to dehydration

You can monitor your toxic metal levels with a urine challenge test through a specialized laboratory such as Genova Diagnostics that measures toxic metal levels before and while taking liquid zeolite. You might be surprised at the result.

I have used liquid zeolite off and on for years and it lowered my toxic metal levels easily without any side effects that I had with other products I tried. Now Pure Body Extra makes detoxing heavy metals with liquid zeolite easy.

Previous Post: « Why Do You Need A Bowel Cleanse?
Next Post: Why use organic food on a detox diet if its no healthier than ordinary food? »