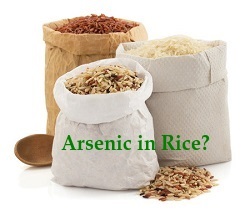 Arsenic in rice was in the news again last week. I was shocked to learn that 58% of food products in the UK exceed new EU recommended limits for arsenic in food for children. Many of these products were rice based.

I say “again” because in September last year the FDA released the results of tests for the presence of arsenic in approximately 1,300 samples of rice and rice products.

The fact that rice all over the world contains more arsenic than other foods has been know for some time.

Although there are strict limits for the amount of arsenic level allowed in water, until this EU recommendation there have been no maximum levels for food and this is only for children.

What’s the problem with arsenic?

As you no doubt know arsenic is a poison and causes toxicity. There are two forms of arsenic, organic and inorganic. Organic arsenic or arsenate is rapidly cleared from the body by the kidneys and it does not accumulate. It can be found naturally in foods such as fish, shellfish and seaweed.

Inorganic arsenic or arsenite is highly toxic. When ingested it is rapidly cleared from the blood but accumulates in the tissues and has been associated with long-term health effects. Scientists say high levels over time could lead to cancer or heart disease and neurological ailments.

So the person who commented on a blog post I saw regarding the TV program that highlighted the problem with arsenic in rice saying it was just scaremongering and that arsenic from rice gets excreted quickly from the body was very wrong.

Napoleon was suspected of having been poisoned by arsenic. Although it was first assumed he was poisoned by his enemies investigators found that the wallpaper in his home contained very high amounts of arsenic.

Another case concerning the American Ambassador Clare Booth Luce was described in the book Detox by Phyllis Saifer MD. In 1953 Clare Booth moved to Rome and after a year began to feel tired and ill. Doctors diagnosed anemia and nervous fatigue but her symptoms grew worse. Eventually one doctor suspected arsenic poisoning which was confirmed with a blood test.

The source of the arsenic in this case was traced back to the paint on the ceiling of her bedroom. Tiny amounts had apparently flaked off and wafted down into her morning coffee. She died aged 84 from cancer.

Some believe that the English novelist Jane Austin may have been unintentionally poisoned by arsenic-based medication.

I saw this comment that a member of a health forum made recently: “I’ve had some undiagnosable health issues and chronic pain for a couple of years now. I’ve had so many tests and have seen so many doctors that I can’t even keep track of it all. Recently I had a 24 hour urine test. My arsenic level is at 60, it should be below 25″.

Acute arsenic poisoning is usually much easier to diagnose than the gradual build up of it that results in long term effects.

Where does arsenic come from?

Arsenic is present naturally in the earth’s crust and in small quantities in rock, soil, water and air. Industrial processes such as mining, smelting and coal-fired power plants all contribute to the presence of arsenic in air, water and soil. It is used in agricultural pesticides and in chemicals for timber preservation. 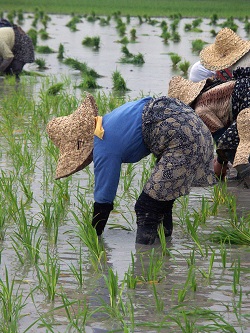 Arsenic is present in many foods, including grains, fruits and vegetables where it is present due to absorption from the soil and water.

Arsenic in rice tends to be a lot higher than other produce because rice is much more absorbent than other foods. It is grown in paddies, which are flooded with water that contains arsenic naturally. Some rice is grown in fields that in the past have been treated with arsenic-based pesticides.

Brown rice generally contains more arsenic than white rice as most of it is concentrated in the germ which is removed by the refining process. Brown Basmati rice contains lower levels of arsenic.

People in places like Bangladesh, where rice is a staple food and eaten three times a day, suffer from symptoms of long term arsenic poisoning.

Washing rice well, or soaking for several hours and rinsing thoroughly before cooking, and cooking it in plenty of water will remove 35% – 45% of the arsenic.

When arsenic gets into your body it combines with sulfur containing enzymes which impacts free radical control, cellular metabolism and detoxification.

Certain enzymes involved in metabolism use sulfur to carry out their function. If arsenic binds to the sulfur the enzymes can begin to behave in abnormal ways or lose their ability to function.

Recent studies suggest arsenic may act as an endocrine disrupter by binding to hormone receptors interfering with how they function. This may contribute to the development of diabetes, cancer and vascular disease.

While some people can detox arsenic fairly well others cannot. Some of it may be bound to sulfur groups such as glutathione and excreted in the urine or bile but it is mostly detoxified through a biochemical reaction known as methylation.

It is known that up to 40% of the population have methylation defects either as a result of genetic mutations or deficiency of key nutrients so when they are exposed to toxins including heavy metals like arsenic they have a harder time getting rid of them.

How to test for arsenic toxicity

As arsenic is cleared from the blood fairly rapidly random blood and urine testing is only valid for acute arsenic poisoning.

Hair mineral analysis is a bit hit and miss for heavy metals because if you are not a good excretor of them arsenic may not show in the hair.

The best way to see if you have arsenic or other heavy metal toxicity is to get a challenge urine test done. This involves taking a substance such as DMSA that chelates heavy metals and collecting your urine for several hours afterwards. A small sample is then sent to a laboratory that offers the test. It usually has to be done through a doctor or health practitioner.

What can you do to detox arsenic?

Here’s how to make it.

Use organic produce where possible

Soak the seeds and nuts overnight to release the enzyme exhibitors.
Process the parsley, cilantro (coriander) and olive oil in a blender or food processor until chopped.
Add the garlic, nuts, and seeds, salt or dulse and lemon juice and mix until the mixture is finely blended into a paste.

Store in a glass container in refrigerator.

Is this is the first you have heard about the problems with arsenic in rice? If you eat or have eaten a lot of rice in the past it is probably worth doing an arsenic detox. It may take up to a year to lower toxic levels of arsenic in the body.