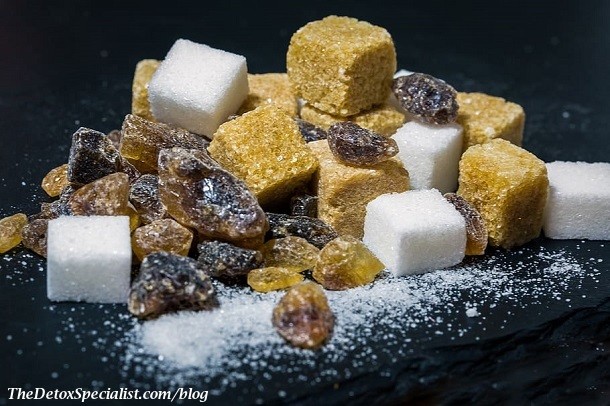 “Sugar is toxic beyond its calories”  say doctors at the University of California and argue that it should be taxed like alcohol and tobacco. So what exactly do they mean by that and is that why you should avoid it while on a detox diet?

What do we mean by sugar?

Carbohydrate is the main source of calories and energy in most diets. The two main forms of carbohydrates are sugars (such as fructose, glucose, and lactose) and starches, which are found in foods such as starchy vegetables, grains, rice, breads, and cereals.

The white stuff we know as sugar is sucrose which is made up of fructose and glucose.Our bodies digest and turn most carbohydrates into glucose, the most important carbohydrate for us. Glucose is the only source of energy that can be used by our brains.

So, what’s wrong with sugar?

Our ancestors ate far more complex carbohydrates and it is only since the middle of the 19th Century that our intake of refined carbohydrates increased significantly. And, the consumption of sugar worldwide has trebled over the past 50 years.

Refined foods have been processed in a way which removes vital vitamins, minerals and fiber. Complex carbohydrates are digested slowly and the fiber slows the release of glucose into the blood stream.

Refined carbohydrates such as white sugar, foods containing it, white flour products, candies (sweets) and chocolate are all digested very rapidly and glucose is released very quickly into the blood stream.

There should be a constant level of glucose in the blood and any rise in the level normally triggers the pancreas to produce the hormone insulin which takes the glucose out of the blood stream into the cells to be converted to energy.

Too much glucose in the blood damages the arteries, nerves, eyes, and kidneys which is the danger in diabetes when the blood sugar is not controlled well enough.

Very often the pancreas becomes over-reactive and too much insulin is secreted causing the blood sugar to plummet. This results in a period of low blood sugar before the body can bring in other hormonal controls to re-establish the status quo.

If the over-stimulation of the pancreas continues it may eventually become exhausted and no longer produce insulin which results in diabetes. In some cases of late onset or type II diabetes the insulin is produced but the cells are resistant to its effects.

This is a condition called insulin resistance. The glucose cannot be driven into  the cells and it is turned into and stored as fat instead. Sugar is fueling the obesity crisis in many Western countries and doctors are calling for it to be controlled like alcohol and tobacco.

Why should you avoid sugar on a detox diet?

1 Eating sugar plays havoc with your blood sugar balance as you have seen above. Two other glands, the adrenals and the liver are involved in keeping the blood sugar stable.

If the blood sugar drops too low or too quickly adrenaline is released from the adrenal glands which counteracts the effects of insulin. Another hormone from the pancreas, glucagon, helps the liver to release stored glucose into the blood stream.

So, you can see that eating sugar causes the release of a lot of hormones which stresses your body and make you feel bad.

2. Sugar is very acid forming which is just the opposite of what we are trying to achieve on a detox diet. The cells detox themselves best when the tissues are very slightly alkaline.

The blood pH has to be very precisely controlled and your body has a number of buffering systems in place should it start to alter. One of the buffers is organic calcium which the body draws from the bones to neutralize the acid. Calcium is one of the essential minerals that is needed for detox.

Soft sugary drinks haven’t  been called “acid bombs” for nothing. A glass of Coke, Pepsi or similar drink  can shoot the equivalent of 9 teaspoons of refined sugar straight into your blood stream.

If you drink soft drinks and eat other refined products during your detox not only will you constantly be acidifying your body hindering detox but you will be draining your body of it’s calcium stores. The habit of eating and drinking refined sugar is one of the main causes of osteoporosis.

Yeast and some bad bacteria ferment sugar in the gut. This produces gases which damage the gut lining. Some researchers have suggested that there may be a link between refined sugar intake and colitis.

Refined sugar has been stripped of its vitamins and minerals so when you eat it your body has to draw on its reserves of those minerals and vitamins to digest and metabolize it. That’s why is sugar is referred to as “empty calories”

So it’s true, sugar is toxic and must be avoided even if you are not following a detox diet. Don’t forget that sugar is hidden in all sorts of food products. It’s hard to get away from it. If you normally have a lot of sugar and find it hard to give it up or constantly have cravings you could benefit from my 7 Day Sugar Detox and Cleanse Program

Previous Post: « The Secrets Of Using Healthy Seeds On A Detox Diet
Next Post: How To Heal Your Body Without Prescription Drugs That Damage Your Liver »