Well, this must be the year of the the sugar detox diet. Everyone, it seems, is jumping on the bandwagon with a book about detoxing sugar.  I have already written one article about sugar detox recently but it’s so much in the news that I thought another one wouldn’t be amiss.

The Evidence Based Research

When other doctors have been saying there is no evidence that detox works he says “I know it works, because it’s grounded in evidence-based research and decades of experience…

I also know it works because we offered 600 people the chance to try it, and the results were nothing short of amazing. I was delighted to see so many people feeling great about their bodies, their health and themselves. Collectively, they lost more than 4,000 pounds and saw symptoms from chronic diseases drop by 62% in just 10 days!”

A sugar detox is not a detox at all of course. You can’t detox sugar. It simply means that you are going to stop eating sugar. You are going to kick your sugar habit. Your health will be so much better for it.

Just recently The Mail on Sunday included a 31 page handbook written by Australian Journalist, Sarah Wilson, former editor of Cosmopolitan magazine and the author of the bestselling I Quit Sugar

From her teens she’d been riding a horrible rollercoaster of sugar highs and lows. She would binge. Then, feeling guilty, she would starve herself the rest of the day.

She then developed Hashimoto’s, another autoimmune disease. She decided she had to quit sugar. 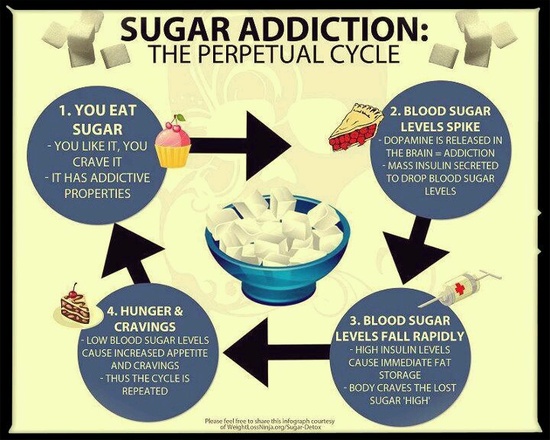 In the booklet she reminds us that sugar may be more addictive than cocaine and could be as harmful as tobacco.

It’s true, researchers have shown that the chemicals in sugar communicate with the same parts of the brain as morphine and heroin.

She says that it’s fructose that is the enemy and not sugar per se.

I disagree. Sugar is the enemy for many reasons but many health experts are now saying that fructose is even worse. They are both the enemy.

Professor Robert Lustig, author of Fat Chance: The Bitter Truth About Sugar, and numerous scientific articles, explains that instead of helping to sate us, some scientists believe that fructose fools our brains into thinking we are not full, so we overeat.

Excess fructose cannot be converted into energy by our cells like glucose (from sugar) can. It is turned into liver fat instead. When your liver is full of fat it cannot function efficiently.

That starts a cascade of insulin resistance (insulin promotes sugar uptake from blood) which leads to chronic metabolic disease, including diabetes and heart disease.

But, excess glucose that is not converted into energy is turned into fat too and stored in fat cells all over the body.

Strangely enough Nikki Oakley, whose story of sugar addiction recently appeared in The Daily Mail, said that her weight did not balloon in spite of eating equivalent of 50 teaspoons a day. But, she admits that she did lose weight when she quit sugar.

She ate chocolate cookies (biscuits) for breakfast, ate puddings instead of an evening meal and raided the candy (sweet) cupboard during years of overindulgence to satisfy her cravings.

The reason we suffer from such strong sugar cravings is due to a hormone called leptin, which regulates your craving for sweet foods.

Basically, when sugar is metabolized and stored as fat, it releases excessive amounts of leptin into your blood. Too much leptin, and you become resistant to it. Once that happens, your body has difficulty communicating to your brain that you aren’t hungry.

Kicking the sugar habit has transformed Nikki’s life. But it wasn’t easy.

Her addiction was so severe that when she quit sugar she would often burst into tears, was short-tempered, listless, depressed and suffered severe headaches.

Sarah’s advice when you detox sugar is not to go cold turkey but to start with easy swaps. You cut back on refined carbohydrates such as pastries, white pasta, white bread and white flour products as well because these type of foods release sugars into the blood stream fast.

After the first two weeks she says to cut out fruit entirely too for the 8 week program. Sarah says that from her research she has learnt that we are designed to metabolise a small amount of sugar a day – about 5 – 9 teaspoons which she says is the equivalent of 2 pieces of fruit.

Well, I don’t know where she got that fact from but 2 pieces of fruit does not seem a lot to me. I’ve asked around and no one knows of any scientific research that states how much sugar we are designed to metabolize.

A lot depends on your particular metabolic type, your nutrient status and probably your genes. Fructose in fruit behaves a lot differently than high fructose corn syrup.

When you eat fruit you are also eating fiber and vitamins and minerals. Fruit will not spike your blood sugar the same way as table sugar or high fructose corn syrup.

What we do know for a fact is that the small fruits that paleolithic man ate bore almost no resemblance to today’s fruit. Modern fruit is bred to be huge and much sweeter. Some say 30 times sweeter. That must make a difference.

She explains how replacing sugar with healthy fat and protein is the trick to making the sugar detox work. They fill you up and stop cravings.

She uses olive oil, walnut oil and macadamia oil for pouring over salads and vegetables. I like pumpkin seed oil.

For protein she suggests eggs, cheese, nuts and coconuts. Yogurt is good too and you can include free range meat, poultry, and fish.

You have to get away from the idea of cereal for breakfast and she gives her recipe for Green Eggs with Ham: (my additions in brackets) 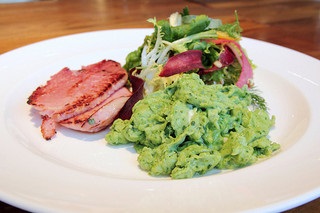 Lightly mix eggs, salt, milk or cream with fork in a small bowl.
Melt butter in a frying pan over medium heat.
Pour in egg mixture.
Once eggs take a little, gently fold and lift using a flat wooden spatula- don’t stir
Pause and fold again.
After a minute add pesto and fold a little more until the whole lot is soft and still a bit runny.
Remove from heat and let sit. Gently stir to ensure it’s cooked through.
Serve with toast, cherry tomatoes and a few slices of grilled ham.

Place all in blender and whizz until creamy
Add seasoning to taste.

She also suggests making smoothies for breakfast using coconut, yogurt or almond milk as the base.

Place all the ingredients into a strong blender and blend until very smooth.
Pour into a nice serving glass and sip slowly.
Enjoy!

Removing sugar from your diet with a sugar detox diet is the fastest way to lose fat, increase your energy and transform your health immeasurably. Are you ready to do it?