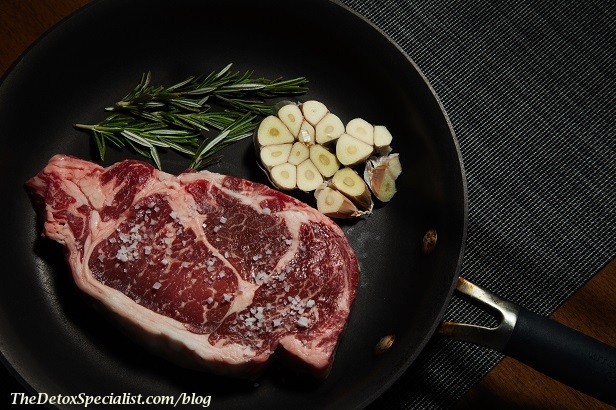 Although it may sound bizarre The Carnivore Diet is fast becoming a popular way for detoxing and cleansing to improve health and lose weight. Several health practitioners are using this meat diet with patients for cleansing the body and to reset the gut with astounding results.

You have no doubt heard of the importance of detoxing and cleansing to stay healthy and improve health issues. With all the pollutants that find their way into our bodies these days we become clogged with toxins which can damage our cells and our organs’ performance.

Fortunately, there are many ways to cleanse our bodies simply through food. The carnivore diet is one such means.

Many people are skeptical because of all we’ve heard about meat and saturated fat being bad for us.  Yet, it has proven benefits, especially when viewed from a historical perspective. Let’s take a closer look at this diet and how it can be used for detoxing.

What is the Carnivore Diet?

The Carnivore Diet, also referred to as the “zero-carb diet,” is as simple as it sounds: a diet that consists of eating meat, and other animal products, including fish, some cheeses and eggs. Fruits and vegetables are entirely eliminated.

I can hear you exclaim. “What about all the studies that show we need 5 –  9 portions of fruit and veg a day to prevent cancer?”  And what about all the benefits we’ve heard about a plant-based diet?

According to Paul Saladino, a medical Doctor and author of The Carnivore Code, who has been eating a 100% carnivore diet for several years, you can get all the necessary vitamins, minerals and polyphenols for the body from meat.

Good quality organic and grass-fed meat provides a potent source of protein and energy, not to mention all of the nutrients the body needs for detoxing.

For drinks coffee and tea are allowed but people drink mostly pure water. Alcohol is not allowed either. In this respect it’s similar to a detox diet.

I am not a fan of coffee for a variety of reasons including caffeine (sympathetic nervous system activation, sleep disturbance, etc.), pesticides, mold toxins and acrylamide formed in the roasting process.

Foods to avoid are added sugar, sweet beverages, grains, sauces and fancy seasonings, and basically anything that did not come from an animal. Processed meats, like sausages, are eliminated, as they may contain chemicals.

Why Detox With the Carnivore Diet?

Vegetables and fruits have an immortal status among the general population as being stalwarts of health for humans, but they can also be detrimental in some cases.

Dr. Paul Saladino from the University of Arizona, has studied autoimmune diseases for decades with intention on discovering their causes within the body. As a heavy advocate for the carnivore diet, he offers interesting advice: maybe plants don’t want to get eaten.

After all, some edible plants exert toxins that can cause mild to severe damage to the human body. “Plants can be harmful at times,” claims Dr. Saladino.

plant lectins, [which are] plant proteins, seek out and bind to certain sugar molecules on the surface of cells,” which can falsely trigger the immune system.

Wheat germ agglutinin, a protein commonly found in grain products, “can have a detrimental effect on [the] gut microbiome” and severely limits nutrient absorption in the intestinal tract.

Lack of fiber on Carnivore

By now you may be wondering about fiber. Meat does not contain any fiber and we need fiber for good bowel detox function and a diverse microbiome don’t we? Well, apparently not.  Although people starting a carnivore diet may find they get constipated initially a lack of fiber does not automatically lead to constipation.

On the contrary in one published study some researchers found that fiber may be a leading cause of constipation and stopping it reduces constipation. Proponents of the diet point out that the Inuit who have eaten an meat diet for generations don’t suffer with any digestive issues. Also, they have a diverse microbiome which cancels the idea that in order to have a diverse microbiome you need fiber.

Apart from constipation some people initially get diarrhea from all the fat but both constipation and diarrhea normalize after a short time.

How does the carnivore diet remedy this? Dr. Saladino recommends a “nose-to-tail” approach to eating animals, in honor of our ancestors who “were certainly eating the whole animal, both from a spiritual perspective or a respective perspective for the animal and from a functional pragmatic perspective…. You can get every single [nutrient, amino acid, or vitamin] that [you] need.”

Indeed, from zinc, to copper, iron, vitamin b12, all essential nutrients and amino acids can be found within animals! Grass fed animal fat is a great source of fat soluble vitamins like vitamin E and vitamin K2. The fat is also a good source of omega-3 fatty acids which is important for detoxification.

Organ meats especially are extremely nutrient dense. They keep you fuller for longer and provide key nutrients for detoxing your body. Although the Vitamin C content of the Carnivore diet is lower than a diet high in fruit and vegetables, raw liver, eggs and fish roe contain it.

It’s argued that molecules of glucose and Vitamin C are virtually identical. They use the same pathways for absorption into cells so they end up competing for uptake into cells. And glucose wins out preferentially.

Far less Vitamin C is needed in the absence of carbohydrates because it doesn’t have to constantly compete with glucose for uptake so the small amount of Vitamin C provided in a Carnivore Diet is considered to be adequate.

Conversely, gluten, lectins, oxalates and other toxic plant chemicals restrict the body’s ability to absorb and utilize those nutrients.

The liver uses amino acids in Phase 2 detox pathways and they are plentiful in meat. This combined with all the other nutrients you get from animal products help with detoxing the body.

Living as a Carnivore

If instead we return to a simpler diet, only eating every part of the animal that we can as our ancestors had done, we may experience what Saladino calls “the best multivitamin ever.”

If you are concerned about the possible lack of nutrients in the carnivore diet Saladino regularly gets blood work done on himself and his patients and finds they are not lacking in any vitamins or minerals.

And it’s not without proof. Alex Chase, writer of The Carnivore Cleanse, reminds us how ubiquitous toxins are, especially in plant-only diets to due crop handling and pesticides. But switching to the carnivore diet eating grass-fed meat can lead us on the road to detoxing. As fat cells are used up to produce energy the toxins stored in them are released. Just like a regular  detox plan you also have to reduce the number of toxic products you are exposed to in the home.

Sharing her own success story, Lisa Alex Gray, a 54-year-old who tried the carnivore diet for about a year, admits her stomach ulcers and digestive issues have decreased dramatically after changing to the diet. Other personal claims are increased energy, weight loss, muscle gains and sharper focus.

I have a habit of trying out different diets on myself so that I know better what suits me and it helps me know what clients are going through. Last year I decided to try the carnivore diet myself for a gut reset as I had been having some symptoms of SIBO again.

I eased into it gradually and then followed the diet for 7 1/2 months. I did not go through any carb withdrawal or the keto flu stage as some people do because I was already eating a relatively low carb diet.

I found it novel and interesting to start with, cooking fatty cuts of meat that I had not ever cooked previously. I had to make sure I was eating enough fat because I could not afford to lose weight. In fact I wanted to put some on and happily I did.

Because of my histamine intolerance I found that I did not tolerate organ meats or fish at all. After about 6 1/2 months on the diet I started to feel unwell. In spite of the fact that many people say what tremendous energy they had on the diet I can’t say that I felt bursting with energy during any of the time I was on it.

After 7 1/2 months I decided that it was time to introduce some vegetables and I did so very carefully and gradually as I had heard that some people had trouble introducing them again if they had gone on the diet for a bowel issue. I did fine on some veg but reacted to others that I had previously eaten with no apparent problem. I did however feel a lot better and the symptoms I had been experiencing disappeared. I concluded that I probably needed the folate as they were all green vegetables that I started with.

I was curious as to what eating all that fat had done to my cholesterol and fatty acids. Grass-fed and pastured meat has the correct ratio of omega 6 to omega 3 fatty acids at 3:1 as opposed to commercially produced cattle fed on grain where the Omega-6 to 3 ratio is 20:1. Many people eat too many foods containing Omega 6 fats which are pro-inflammatory when out of balance with Omega 3.

Why is that bad?  Many chronic diseases like heart disease, diabetes, arthritis and cancer have chronic inflammation as the underlying cause.

It is not apparently unusual to see cholesterol increase on a carnivore diet but it is not necessarily considered to be bad. My ferritin (iron storage) level was higher than normal but again I find that is not an unusual finding on a carnivore diet. In fact Dr Shawn Baker a proponent of the carnivore diet and author of The Carnivore Diet, thinks that as our ancestors probably ate a lot of meat it is not harmful unless you have a genetic predisposition to hemochromatosis. My own doctor said he is not at all worried about my level so neither am I. I will just keep an eye on it.

Regarding my fatty acids I was surprised to find that I was very low in all the omega 6 and all the omega 3 fatty acids. My genetic profile does suggest that I have an issue with fat metabolism. On the other hand it could mean that I have an absorption problem. I have always suspected that I do not produce much bile which could account for poor absorption so I am now working on an approach to rectify that.

So, what do you think? Might you be tempted to try the Carnivore Diet. Would you fancy it as a way of detoxing instead of the traditional detox diet?

Of course you may take the carnivore stories with a grain of salt, but even science has shown that eating only animals products is not as unhealthy as most believe.

Previous Post: « Health Benefits of Chia Seeds for Detoxing the Gut
Next Post: 6 Ways to Infuse Cannabis into Edibles »