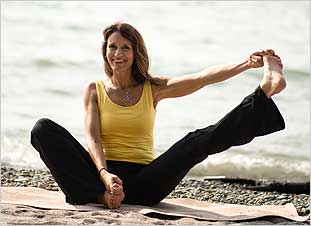 Last week one of the UK’s popular newspapers ran a series about the health benefits of Yoga but I didn’t read anything about detox yoga. The only thing that was mentioned was that Bikram Yoga promotes sweating which is believed to help flush toxins from the body.

Bikram or hot yoga (not all hot yoga is Bikram) is practised in a 40°C (104°F) room with a humidity of 40%. The repetition of postures combined with the heat is reputed to encourage optimal functioning of all organs, tissues, glands, nerves, and systems as well as the detoxification of toxins.

There is some controversy over claims that you can release toxins through the skin with hot or detox yoga.

According to Amber Larsen, a biologist and Yin Yoga Specialist “doing a ninety-minute hot yoga session and sweating to death is not releasing toxins. You really are just dehydrating yourself and losing only water weight.”

On the other hand yoga teacher Kara-Leah Grant says “yoga is the best detox diet you’ll ever do. Regular practice of yoga will solve all of your weight and toxic body issues.”

So who is right?

Well, it’s true that you can lose water and dehydrate when you sweat but according to published studies certain toxins can be and are eliminated through sweat. One study showed that toxic phthalate compounds including DEHP and MEHP could be eliminated by “induced perspiration”.

DEHP, a hormone disrupter,  is a widely used phthalate plasticizer that gets into our food and our bodies from certain foodwraps and food packaging during storage of food. Studies have linked phthalates to hormone changes, lower sperm count, less mobile sperm, birth defects in the male reproductive system, obesity, diabetes and thyroid irregularities.

A good reason not to use plastic wraps nor heat food in plastic containers!

Another study identified Bisphenol A, another toxic chemical that disrupts your hormones and is believed to be the cause of a number of health problems, in sweat of individuals even though none was detected in their serum or urine samples. This tells us that the chemicals were stored elsewhere and they were released into the sweat.

Besides detoxing via sweat yoga can help strengthen all your detox organs. The aim of a yoga pose called Open Side Fierce, for example, is to enhance the functions of the detox organs the liver and kidneys to stimulate waste removal.

Generally yoga moves will increase your heartbeat and breathing rate which in turn will pump blood faster to circulate oxygenated blood and lymph to all your body cells enabling them to take in nutrients and expel wastes.

Yoga keeps you super-trim and fit

Yoga is not all about detoxing though. Many celebrities maintain that yoga is responsible for keeping them super-trim, toned and fit.

If you’ve never done any yoga you might think that it’s too tame for much weight loss but devotees of power yoga maintain it can offer all the fat-burning potential, and heart benefits of an aerobic workout.

Studies have shown that yoga can lower stress hormone levels and increases insulin sensitivity – a signal to your body to burn food as fuel rather than store it as fat.  A lot of the weight loss potential of detox yoga could be due to the fact that it helps to detox the chemicals that interfere with the weight control system. 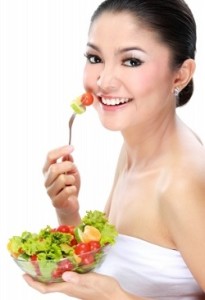 The thing that I noticed was that there was no mention of diet to speak of in the series. One lady called Zoe lost 3 stone (42lbs) over 3 years doing yoga once a week and said that “because doing a class leaves me feeling so good inside, for a couple of days afterwards I find myself naturally drawn towards healthy snacks such as fruit or nuts instead of crisps and chocolate.”

I’ve been to yoga classes myself and I can’t remember any of the teachers mentioning diet which I thought was strange.

Kara-Leah Grant says “you should be able tune into the subtle signals of your body. Being in-tune with your body in this way changes what you put into it so you’re less likely to poison it with toxic food choices. But yoga also helps your organs to function at their maximum capacity, meaning that you become far more efficient at eliminating toxins as well.”

Ancient texts on yoga recommend a minimal diet of a little rice, a few vegetables, some mung dal (lentils) and ghee (clarified butter).

This was fine for yogis spending most of the time sitting in meditation or minimal activity but not right for people with stressful jobs or someone who is very active.

Generally a yogic diet is a balanced combination of fruits, vegetables, legumes, whole grains nuts, and dairy products. It does not include meat, fish, poultry, or eggs.

This type of diet forms the basis of many detox diet plans except dairy products are usually excluded.

It’s important to incorporate some sort of exercise when you cleanse your body and detox yoga is a very healthy way to get it.

Forget about the boring monotony of jogging, running on a treadmill or riding a stationary bike. Do this instead. It almost feels like dancing. Believe it or not, you’ll actually have FUN while you’re getting fit and toned. You’ll be seriously amazed at how it really does help you drop those extra pounds.

In just 14 days you could start to see the numbers on your bathroom scale finally budge, and your clothes fitting more loosely. You will feel more energized and alert during the day, and sleep like a baby at night. And you notice the things that used to stress you out just roll off your back instead of making you snack or overeat unhealthy food.

Have you ever done detox yoga? Would you try it when you next detox?